Spent the afternoon playing paparazzi in the Gion district in Kyoto, Japan.

Remember, Chiyo, geisha are not courtesans. And we are not wives. We sell our skills, not our bodies. We create another secret world, a place only of beauty. The very word “geisha” means artist and to be a geisha is to be judged as a moving work of art. – Memoirs of a Geisha

If you’re going to spot a real-life geisha, Kyoto is the place to do it. We were told prime geisha sighting is between four and six o’ clock so we arrived early to increase our chances. There may have been 80,000 geisha shuffling about in the 1920s, but today, less than 2,000 remain in Japan. Our odds were slim but we were hopeful. 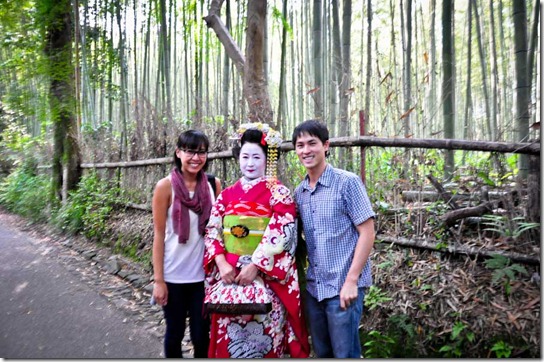 We spent the next hour weaving through the small streets of Gion peaking through doors and windows. Gion isn’t that big so we went back to sit across the street from the the oldest and most famous geisha school.

Another half hour passed, by then I’d been holding my pee for a good two hours. I honestly didn’t care to stick around further and told Gerard I’m going to Starbucks.

When I came back at around quarter to six, a huge crowd had formed. 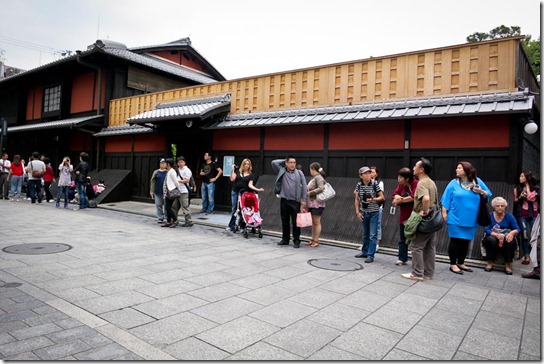 There was a lot of commotion. Gerard was no where to be found and I realized it was the first geisha sighting of the evening. People went nuts (with their cameras)! 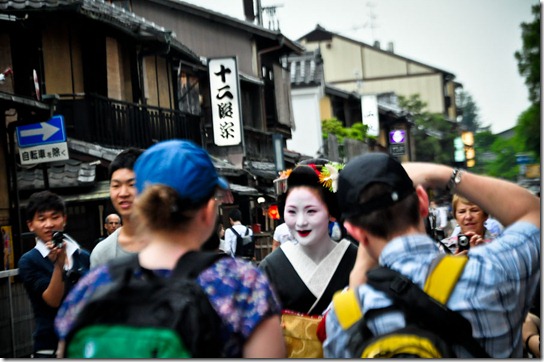 I tried tip toeing, jumping to get a glimpse but there were too many people. Finally, I caught her just before she disappeared behind the curtains of the school. 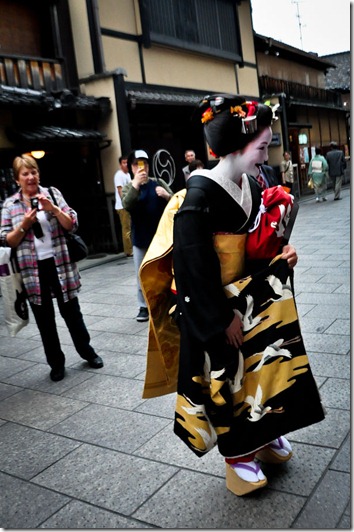 I managed to film her from a respectable distance. Unlike this douche I caught on tape trying to smother the poor thing. And people wonder why modern day geisha complains of public harassment.

Gerard emerged from the crowd and we were like, Did you see? Did you see? back and forth to one another. It was pretty funny, like a celebrity sighting in L.A. or something. 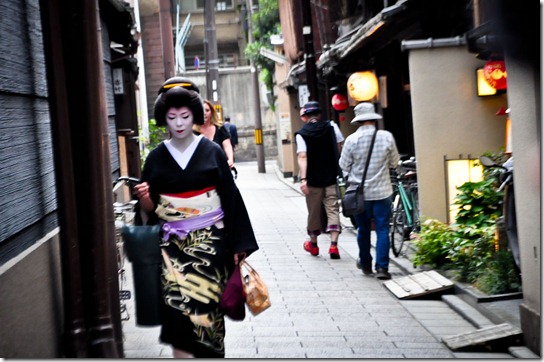 Honestly, that was enough for me, to get a single sighting on our first hunt, I didn’t mind leaving after that. But we decided to hang around just a little longer.

I think school starts promptly at six because we spotted our first maiko – an apprentice geisha – shuffling, effortlessly in her okobo (wooden sandals), down the side street heading towards the school. 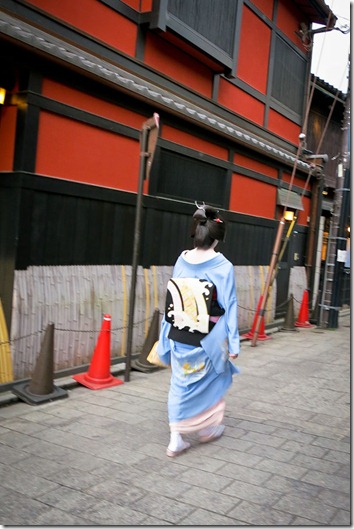 And then another one. One by one they came in their lavish kimonos and neatly coiffed hair, their vibrant red petal lips against their powdery white faces. 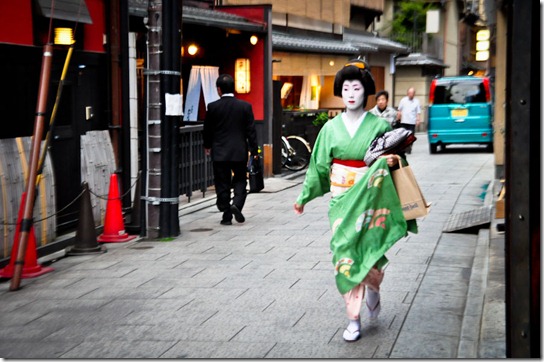 At exactly six o’ clock, the geisha stopped coming. We left soon after and I find myself more intrigued than satisfied, and with a new found infatuation for a culture Gerard and I knew so little about.

That night, we went home, downloaded the movie Memoirs of a Geisha and watched it. Although fictional, it may be the only way we would ever get a glimpse into the secret lives of geisha. And while I thought the acting was a complete debauchery, it was nonetheless, an incredible story.

What do you know about the geisha history and culture?

Sushi to Dai For
Capture the Colour – In Food!