First game drive, meeting the Masai people and having our tents robbed — all on day 2 of our 24-day tour.

No matter how many times you’ve watched Planet Earth or Nat Geo, it doesn’t even come close to seeing this in person.

We had no idea what to expect of our first game day drive. When we pulled up to the gates of the National Park, I admit it looked a bit gimmicky, like a ride through Animal Kingdom or something. But within minutes, we saw gazelles, zebras and wildebeests, and that cheesy feeling quickly went away. I stared wildly into the distance, binoculars clutched in my hands as I mindlessly hum the tunes to Circle of Life and all I could think of was, this place is unreal. 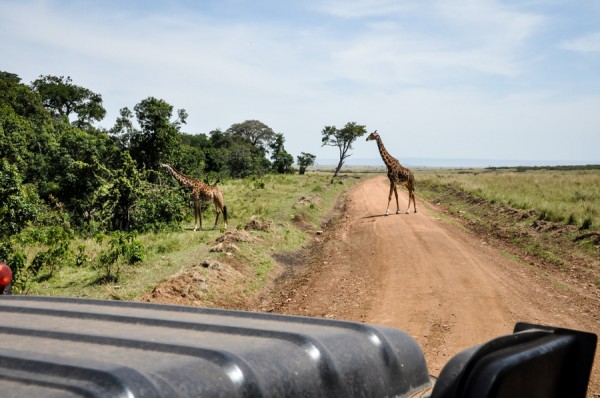 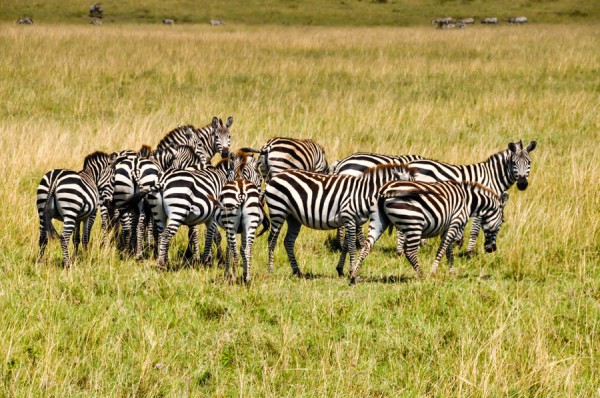 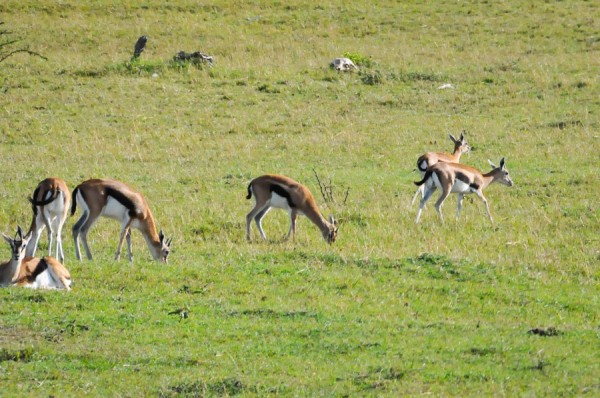 Did we mention we saw wildebeests? We must’ve easily seen thousands of them since there are 1.5 million that cross the Masai Mara during the Great Migration. 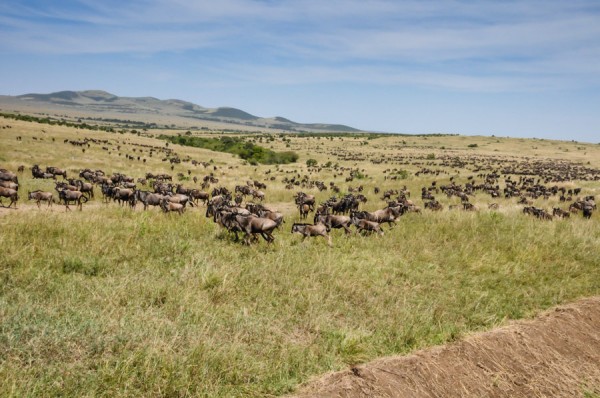 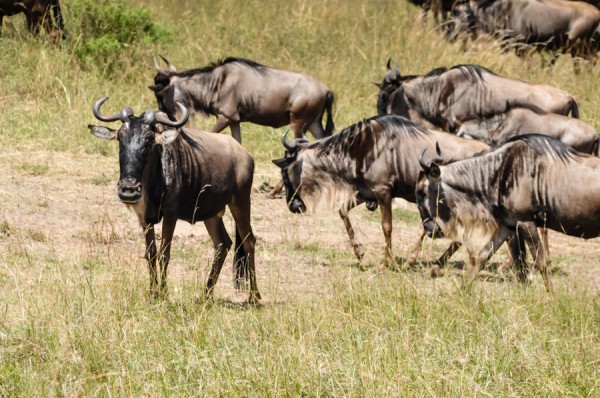 The park stretched for miles on end and as the day went on, we oooh’d and ahhh’d at the wildlife around us: from water buffalos to sleeping hippos, Masai giraffes to herds of elephants, to vultures and jackals and even a cheetah resting in a tree — it’s all here, it really is the circle of life. 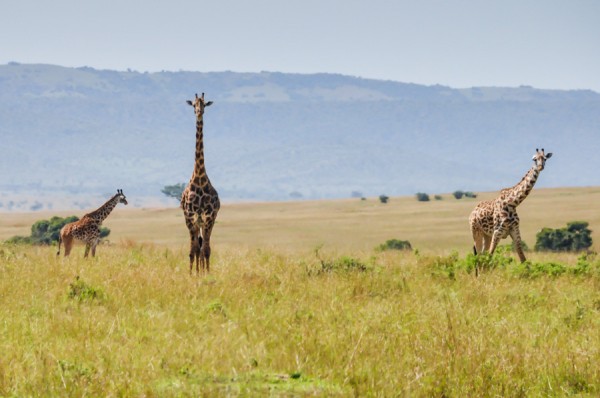 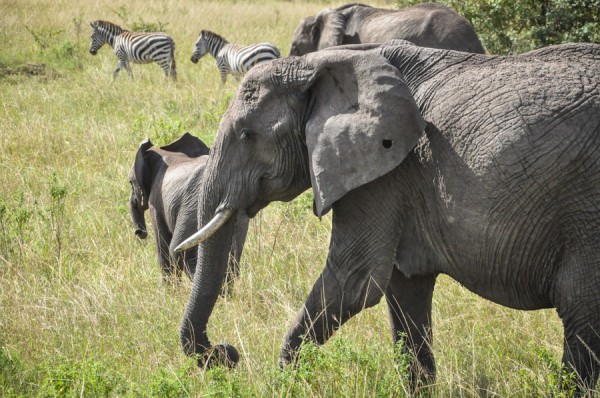 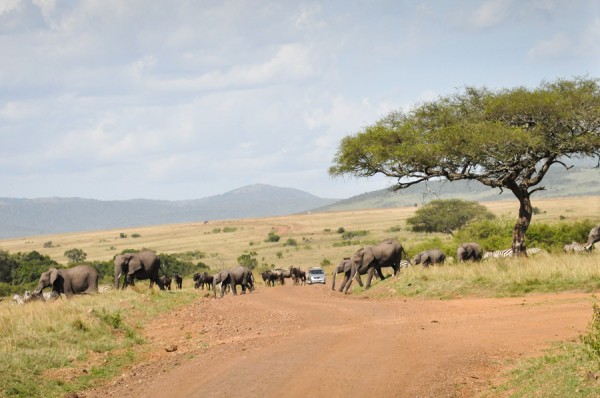 At one point, we got out of our truck and break for lunch by the watering hole. After lunch, we hired an armed guard to take us to the famous water crossing site. You know, it’s that location where animals make the dangerous crossing from Tanzania to Kenya in crocodile-infested water. It’s the start of migration, some have already made the trek. On this day, there were no crossing but still so awesome to see the place. 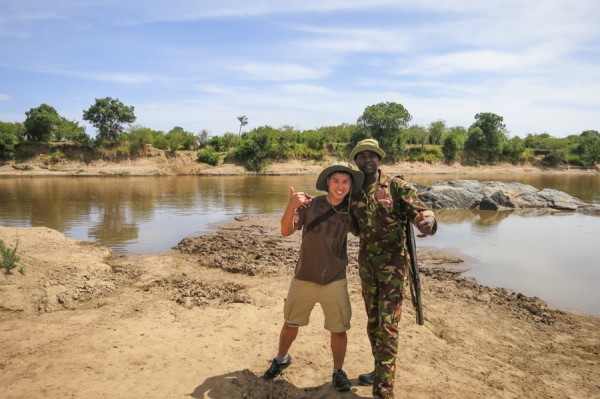 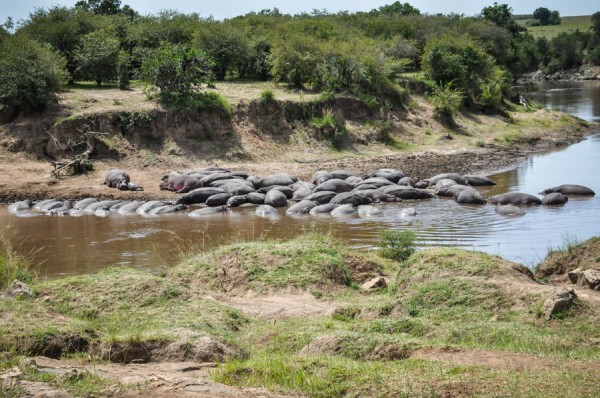 The people of Masai Mara

After our game drive, we were picked up by Alex, our Masai representative and guide for a short tour of his village. He looked young but wise and was kind to answer all of our ridiculous questions like, what’s your real name and how many wives do you have, and can a woman choose not to marry?.. stuff like that.

After a short 5-minute walk from camp, we were greeted at the gates of the village with a row of men decked in brilliant hues of red plaid. The men danced and sang in deep chants. Then they took turns jumping, seeing who can jump higher. They can give Gerard a run for his money. 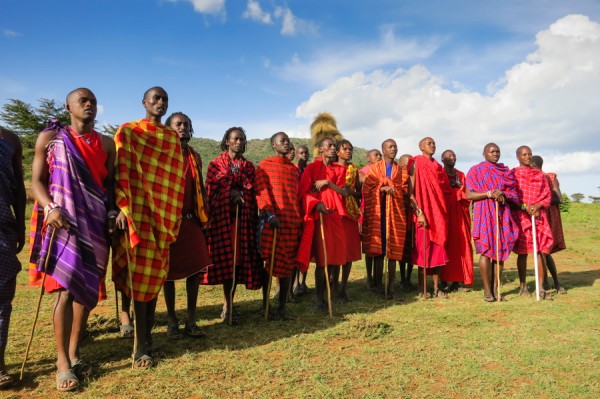 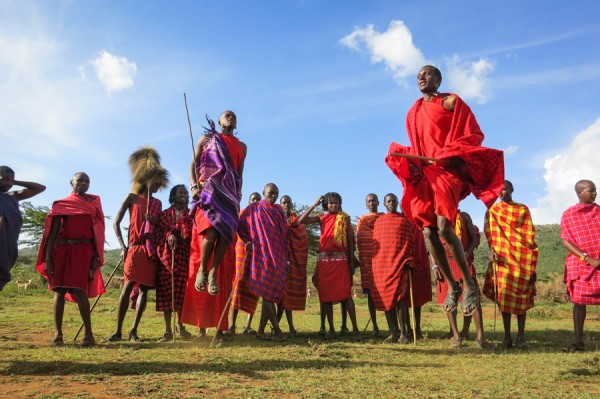 Once finished, we followed Alex in. The homes are built in a circle with brushes lined to protect the people and cattle from wildlife. Each family is entitled to one house. If you have more than one wife, apparently you can have up to four, then you are entitled to one house per wife. Guys, you’ll be happy to know that if you ever want to marry Masai, all you need is 10 cows and maybe a quilt or two! Surprisingly,  the houses are built by the woman of the tribe. The walls are made of sticks weaved together and plastered with a mixture of water, mud and cow dung. I know, kind of gross. 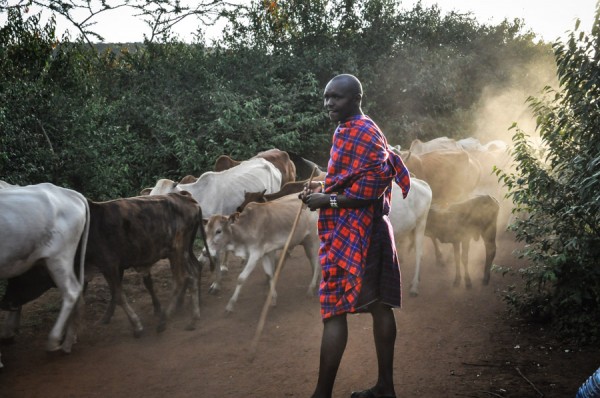 We were invited to see the inside of the homes which was more spacious than it appeared on the exterior. The center of the house is a fire pit. There are two rooms and even a separate quarter for baby cows! Yes, baby cows get to sleep inside where it is safe from wildlife. 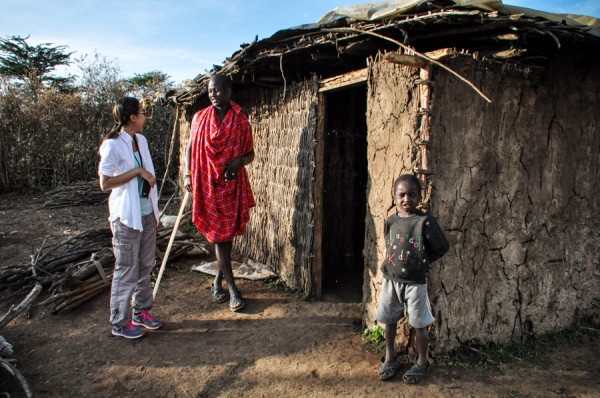 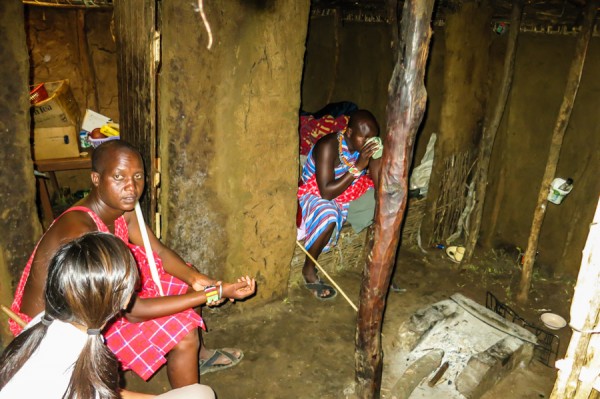 We were both taken back and in awed by their way of living: fires built from sticks, meals consisting of cow’s milk & blood, some starch and the rare meat here and there. Young boys tend to the cattle. Living in the wild, you really have to fend for yourself… just 2 weeks before our visit, the tribe had to kill a lion that was killing cows on their property. They live on simple means and although tourists have taken an interest in them, they seem to be holding on to their roots just fine. I hope it stays that way. They are a fascinating group of people. 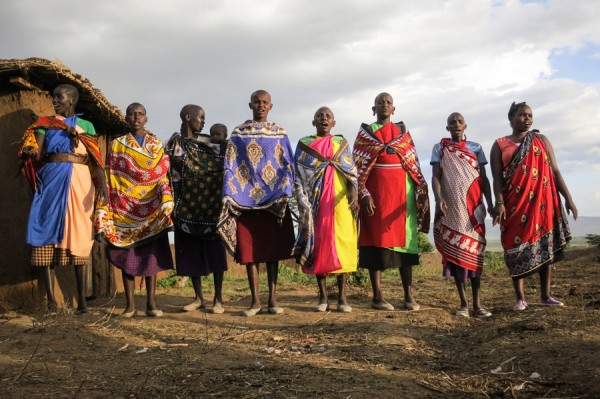 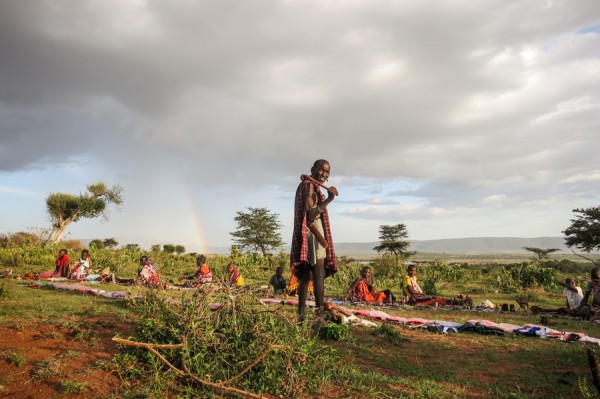 At last look before leaving the village, I noticed the man with the wooden pipe and thought he looked pretty badass. I lifted my camera to take a picture and at that exact moment, he turned back and our eyes met. I didn’t even notice the rainbow then, but remembered he acknowledge my presence with gentlest of gestures, a slight head tilt which I took as permission to snap this picture.

More curious about the Masai way of life? Check out our friend Nellie from Wild Junket’s post here.

Our tents were robbed

That night we returned to camp completely pooped. The sun was setting, and we all had one thing on our minds — hit the showers before it gets dark. We mindlessly tossed our daypacks into our tents, grabbed our quick dry towels, toiletries and headlamps and hit the showers. Some time during my shower, it got dark. I made it back to our tents, quickly sprayed repellent on myself before heading out to dinner. I was surprised to see spaghetti was on the menu. 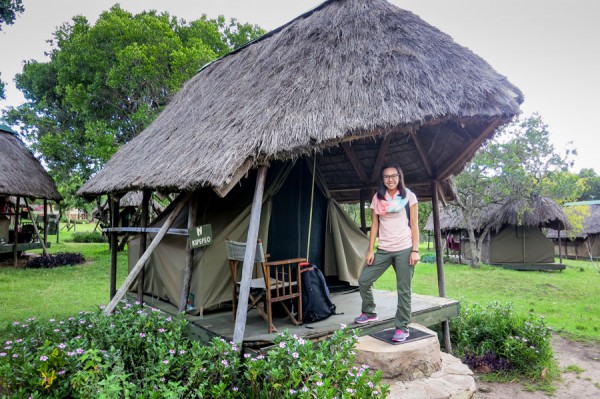 Dinner ended and we went back to our tent. Gerard had not showered yet, so he took it to the showers. I came along because I had to hold the torch light for him while he showered in the dark — camp generator blew out. At some point, one of our trip mate David came over and calmly ask if we were missing anything from our tents because their tents had just been broken into. I barely processed what he said next and just ran toward our tents thinking, Shit, the cash, where did I put our passports, and oh my god the cameras on the bed!

I made it to our tent, fumbled with the zipper  before I let myself in. My head flickered back and forth, headlamp still on my head so I can see. Both cameras and lens still on the bed, I breathed a slight sigh of relief. I searched for our bags next and found that my travel wallet was still there. Inside, our passports and cash. Another huge sigh of relief. Phew..

Our tent did not get robbed, but five of our trip mates’ tents did. Among the stolen, they targeted daypacks with electronics like iPads, cameras and laptops. Two were missing important medications, another nearly $1,000 in cash.

Our tour guide argued with camp staff into the late hours of the night, insisting the police be called. She was baffled of the 10 years she has been at this camp, this is a first — she thinks it was an inside job. The police came, but not without some compensation for their journey. Gerard and I stayed in our tents and listened as our trip mates were called one by one to give a report on their missing items.

I had mixed feelings. On one hand, I was relieved — none of our stuff was stolen. I know I would have been deeply depressed otherwise. We were lucky. On the other hand, I was deeply sadden for our trip mates that they had to go through that.

And this was just day 2.

Have you ever been robbed while on vacation? How did you handle the situation?

Memphis Tours Egypt: 2 Day Trip to Cairo & Giza Pyramids
Where should we honeymoon in 2014?
A place of smiles, a day at the orphanage

Zanzibar diving with Spanish Dancer Divers
A place of smiles, a day at the orphanage