This was our first orphanage visit. We had no idea what to expect. Truthfully, a big part of me didn’t want to go. I’m just not good dealing with situations like this. After some thought though, we decided to go. Because part of traveling and getting to know a place is to experience all that it has to offer — the good, the bad and the ugly. Or in this case, the uncomfortable.

During our month long trip, we visited two orphanages: Little Angels in Uganda and East Africa Orphanage in Kenya.

Little Angels at Lake Bunyoni, a non-profit started by a young man named Duncan, once an orphan himself. A British couple sponsored him at the age of 11. We met Duncan the night before, he came by after dinner to welcome us and brief the group on what we can expect if we choose to visit the orphanage tomorrow. The next day, he came by to escort us to the orphanage. As we walked along the lake, we would ask Duncan all sorts of questions about the village, his reasons for starting the orphanage, that crazy lady at the top of the hill, and he’d humbly answered them all. He said he has seen money flow into charities and organizations but that they weren’t going directly to help the kids and his local village, so he made it his mission to do something about it. Hence, he started Little Angels. I was impressed with the work he has done so far to raise awareness and donations. He is currently in the process of building a health clinic not just for the kids, but for the entire community. There’s a genuine and sincerity quality about him that made us all feel at ease here. 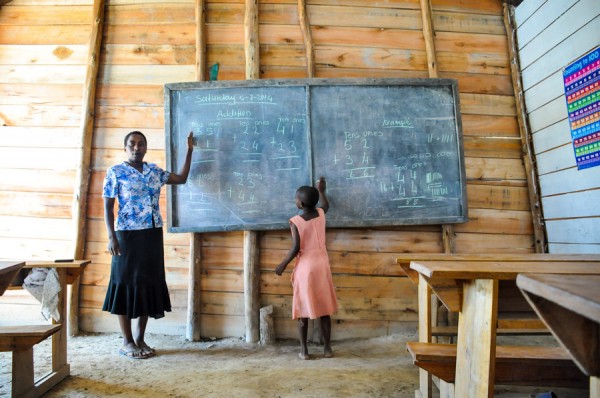 We arrived late morning and the kids were all in class. As we got closer to the classrooms, the children all began singing. I felt the unison singing was a bit staged, but I get they wanted to make a good first impression.

On this day the kids were learning math, addition to be exact. The teacher would assign a math problem to a volunteered student and, with chalk in hand, each student would start counting by marking tallies on the board. An interesting, though effective way to do math I thought.

In the middle of one problem solving session, a student from next door ran in and whispered into the teacher’s ear something short and earnest. The look on the little girl’s face was one of shy and embarrassment. After a brief second, the teacher reached for the eraser and handed it to her. That moment we all realized between the four classes, they must share just one eraser. I’ve never wanted to buy chalk board eraser (and chalk for that matter) more than this very moment itself. 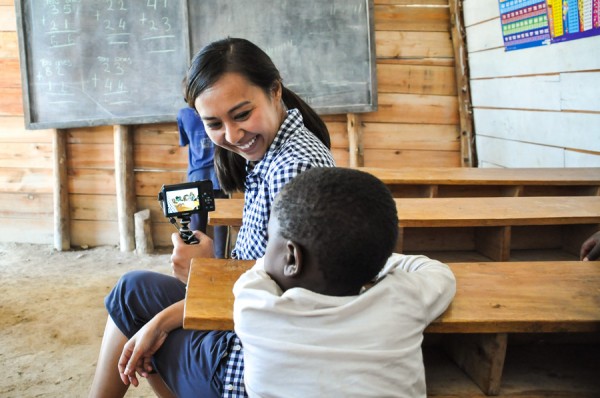 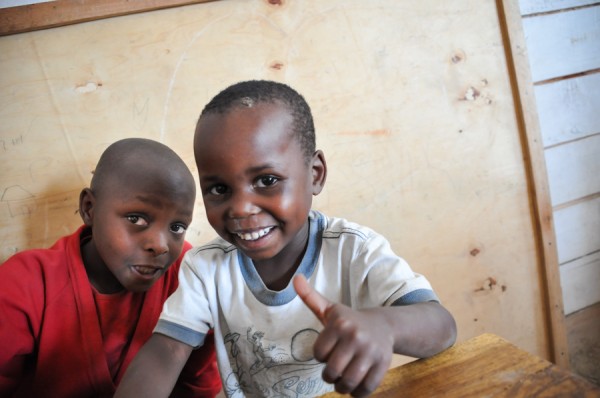 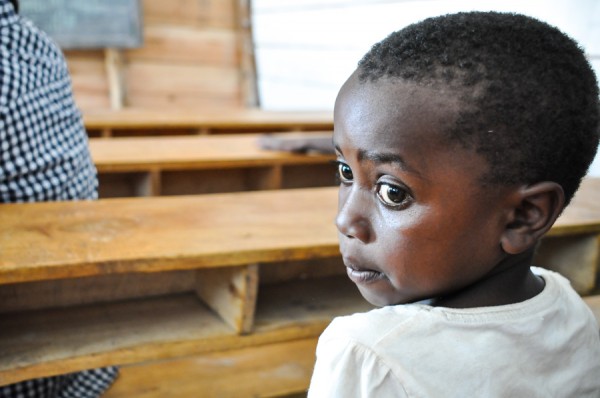 Math session ended and the kids all got up and sang again. They love their singing I tell you. When they finished, the teacher ask if we could teach the children a song. Oh crap. I drew a complete blank. I half thought, the macarena? Nah, that’s out of the question. I finally landed on Itsy Bitsy Spider, simple enough. Except for the spider hand weaving part, the kids could not figure out how to rotate and connect their thumbs to their index fingers. But it did not matter — they were happy to learn a new song. 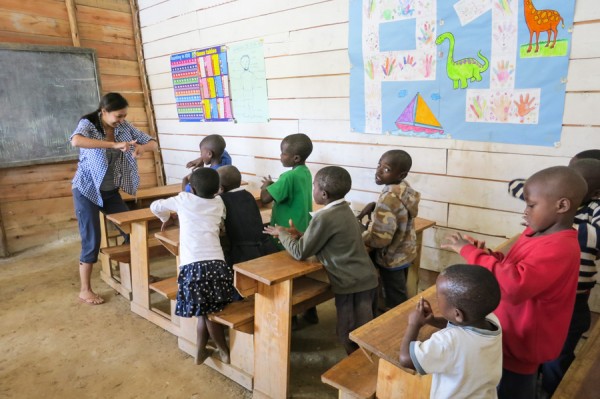 After class, we headed outside to meet up with the rest of the school. The kids formed a circle formation and sang and dance someone as we descend the stairs and sprinkled ourselves throughout the crowd. To our right, teachers were filling plastic mugs with what looked like milk. 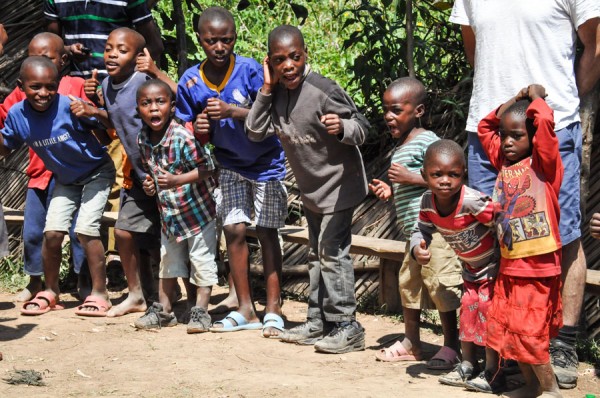 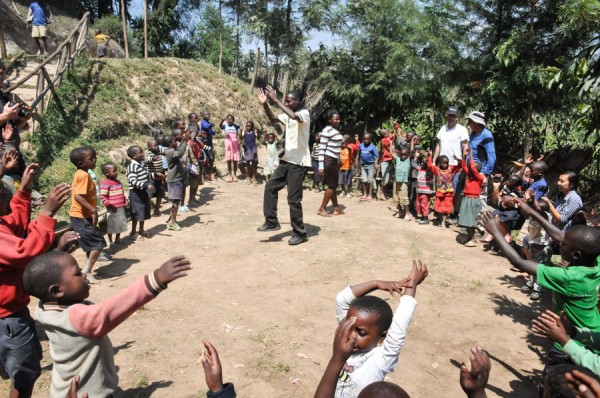 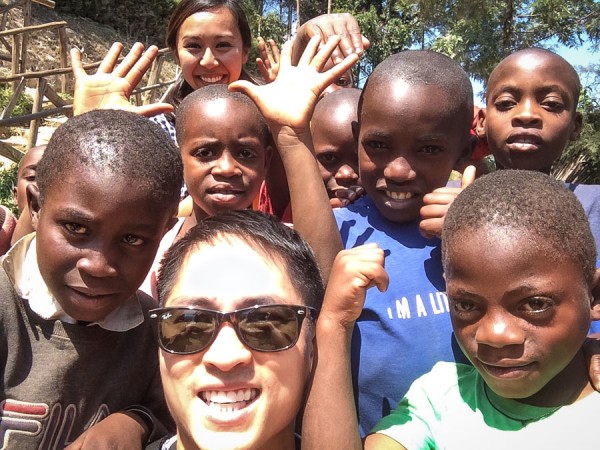 After some vigorous singing and jumping around for recreation, we were dismissed to go play with the kids. Gerard took this opportunity to take a super selfie and the kids were so happy seeing themselves on camera. Our time quickly came to an end. We said our goodbyes as we headed toward long-tail boats docked at the edge of the lake. We get to boat home.

Oh, and as we left we found out what those giant mugs of milk were — not milk, but corn porridge.. it’s what’s for lunch. 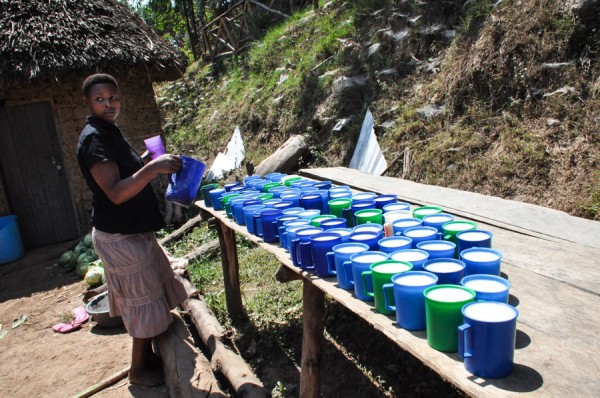 Not all orphanages housed orphans. Some kids come from really poor background and their parents are unable to care for them. Such is the case with East Africa Mission Orphanage. EAMO (East African Mission Orphanage) was established in 1997 by Australian couple, Ralph and May Spinks who today provide a loving home for hundreds of orphaned children including babies and teenage mothers.

When we arrived, I immediately thought, this place is so much bigger than Little Angels. It’s practically a college campus with classrooms, dorm rooms and a huge cafeteria. Not to mention, there is a campsite and hotel built nearby for guests, that’s us — we camped and stayed the night on the premises.

The kids at EAMO often gets visitors. During peak season, it once every month or so. During off season, it could be two or three months before a tour group would come by and visit. So you can imagine how excited the children were to see us walking up toward the gates. In fact, they practically ran at us. There was about a hundred of them and only a dozen of us, it was pretty overwhelming at first. The lucky few clung onto our arms, held our hands and escorted us to dinner. 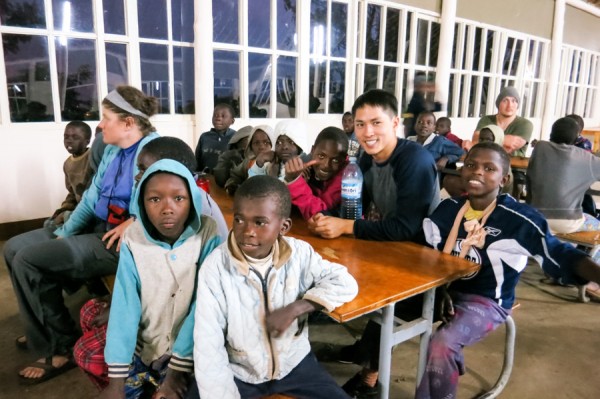 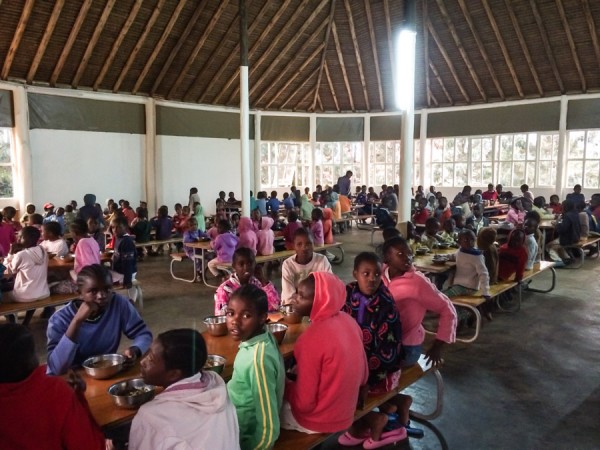 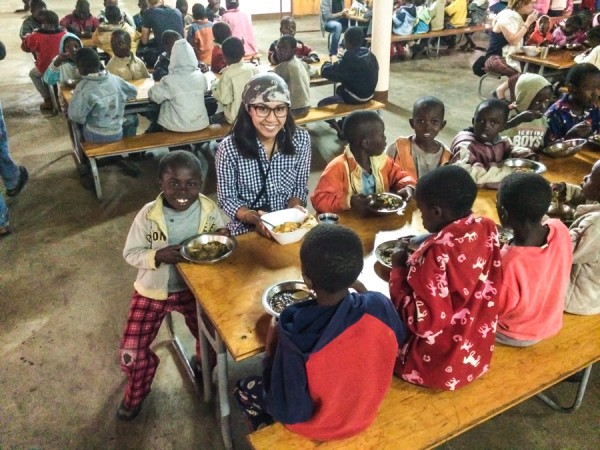 Here is my kid for the day, Moses. He is ten years old although he looks to be the size of a six year old, right? He’s so little. His siblings are also here, and his parents come and visit every few months.

When we entered the cafeteria, the kids were already all seated, anxiously staring us down with their dinner bowl in front of them. I spotted Moses a few tables back. He saw me too and would not break eye contact with me. So, I grabbed my bowl of potato curry and chapati and a glass of water before making my way over to Moses. Several tables waved me down and I felt awkward walking pass them. Luckily, my other tour mates and I spread ourselves out so we’d each get a table.

I will admit, it was really hard to eat my bowl of potato curry and chapati while the kids slurped on their small portion of cabbage and kale mush — veggies they grow on the premises. Not sure why their food was different than ours. They ate their food so fast, it made me wonder how many times they get to eat in a day. I desperately wanted to share my food but knew I did not have enough to go around. Plus, I wasn’t even sure if we were even allowed. I sat there for minutes, staring at my food and my surroundings before I quietly leaned over, gestured to my table of ten and pointing to my bowl to see if they would want some. Their eyes lit up, their smiles genuine like it was Christmas Day. Just to see the look on their faces, I was happy to give up my dinner. One by one I scooped a spoonful of potato curry into each of their bowl. I gave my chapati to Moses. Turns out, it was not against any policy. They’ve just been taught not to ask. Only kindly accept if and when it is given to them. I know.. kind of breaks your heart, right? 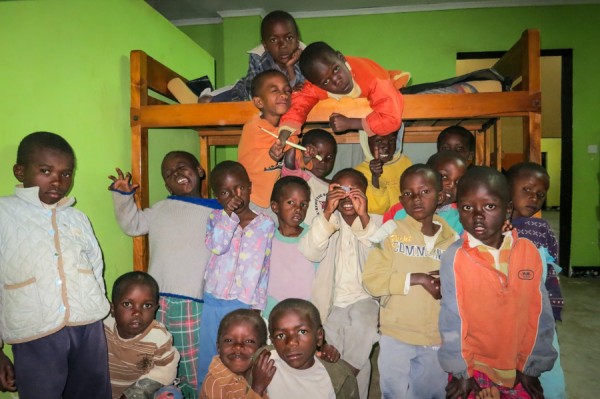 After dinner, the kids wanted to sing. But more than that, the kids wanted to borrow our cameras and phones so that they can take pictures and videos of everyone singing. I was hesitant at first to hand over my camera, what if they drop it? I finally caved and strapped my camera to Moses tiny hands, reminding him to grip in hard so it doesn’t fall. He was besides himself, camera in hand filming all his schoolmates. Not going to lie, I teared a bit. It was something so little and shouldn’t be a big deal at all, meant so much to the kids.

After dinner and singing, we went to their dorms to tuck them all in. Nobody wanted to sleep. Instead, they ask to see more videos and pictures, our iPhones seem far more interesting than us, but we did not mind at all. We stayed until the batteries died and coincidentally, it was bedtime, so we said our goodbyes and headed back to camp in the dark.

For more information on how..

You can help. We donated cash but donation can come in all sorts of ways, not just money. School supplies, clothing, bedding and mattresses are all accepted. You can also sponsor a child, our friends did at Little Angels. The money sponsored goes toward the entire program itself, not specifically to benefit one child. But they’ll send you pictures and updates from the child you sponsor.

Bring your gadgets preferably your iPhone, camera or camcorder. Before arriving in Africa, take pictures and videos of your hometown — streets signs, your office desk, buildings, people, traffic — everything that is normal in your day-to-day life. The kids are fascinated seeing themselves on camera and photos of things they would not otherwise see of the “outside world”. One kid asked if he could see a truck and was overjoyed when I shared a 3-second video of a truck in motion — he played it over and over until it was bedtime. It’s the simplest of things, and something we don’t even think twice of. Yet to see these simple gestures bring out the sincerest of smiles really makes you appreciate everything around you.

Spread the word. Places like Little Angels and East Africa Mission they rely on word of mouth, so please spread the word. If you know anyone who’s headed to Africa, remind them about visiting an orphanage. And if they’re capable, bring supplies to donate — we all know they could use an eraser or two.

For more information on how you can help Little Angels and East Africa Mission:

Have you visited an orphanage? Share your experience in the comments below.

Memphis Tours Egypt: Day 2 of 2
What I wish I knew before overlanding East Africa
#TheAfricaTheMediaNeverShowsYou