An army fit for a king with an extraordinary history to boot.

No visit to China would be complete for us if we didn’t make the journey to Xi’an to visit one of history’s greatest discoveries. In fact, I was secretly more excited to see the Terracotta Warrior Museum then the Great Wall itself, but just slightly. 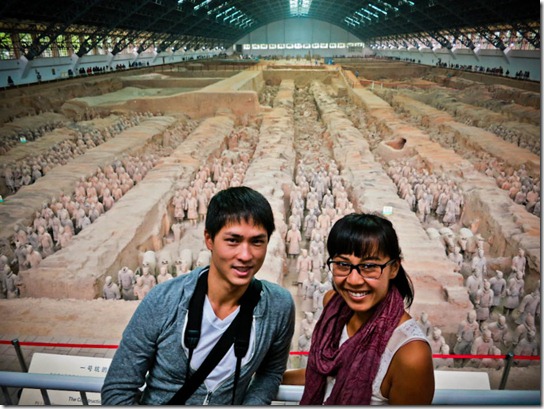 The site in itself is magnificent. But it’s the extraordinary history behind it all that has us captivated. 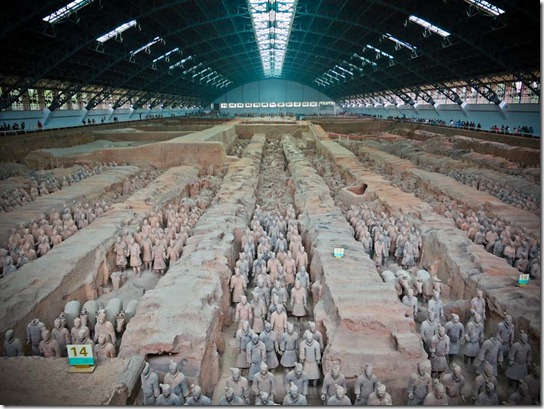 The site was discovered in 1974 by a group of farmers attempting to dig a well. Nearly 2,200 years later, the warriors have, quite literally, stood the test of time. 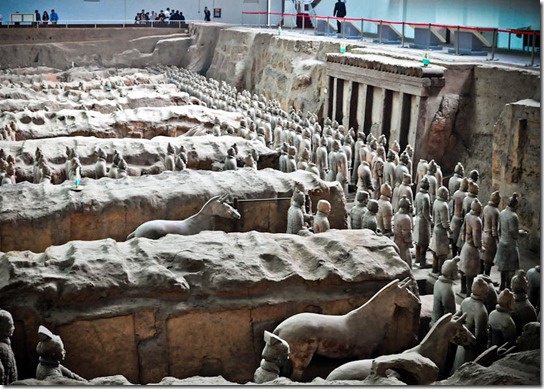 In the 3rd century BC, the first Emperor of China, Qin Shi Huang Di, commissioned a thousand artisans to build him an army as well as an entertainment sight to keep him protected and amused in his afterlife. 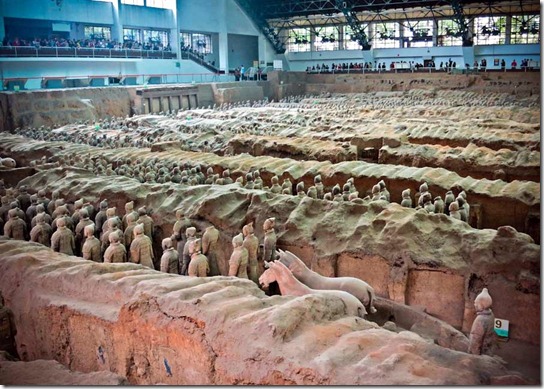 It is estimated the army consists of approximately 8,000 soldiers of different ranks from archers to infantrymen to generals, about 800 horses, 130 chariots, a band of musicians, acrobats and bureaucrats. So far, only just over 1,000 soldiers are on display. 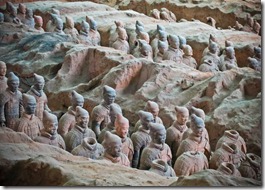 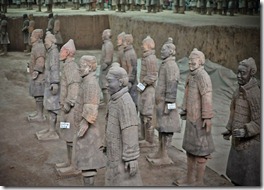 Each terracotta warrior is unique – built with a sense of realism from the individualized details of the face (ears, nose and other facial features) to their hair style on the back of their head, including wardrobe to associate with different rankings. 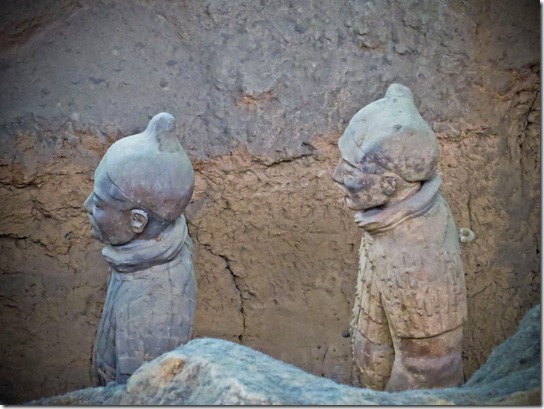 It’s thought that Qin’s enemies, kingdoms he had conquered lay east of his own, therefore his army is all facing to the East. 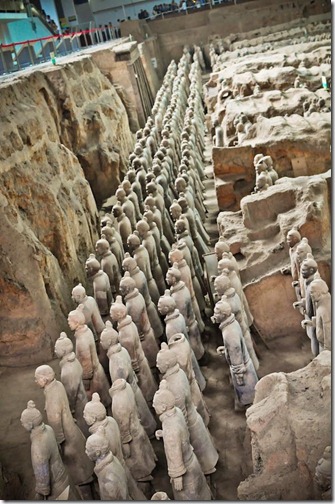 When the soldier were originally made, they were brightly colored – vibrant green and red and blue. Unfortunately, the current terracotta warriors on display have since oxidized dull and grey when exposed to air. Archaeologists are now taking their sweet time excavating Pit 3 in order to preserve the original vivid colors. 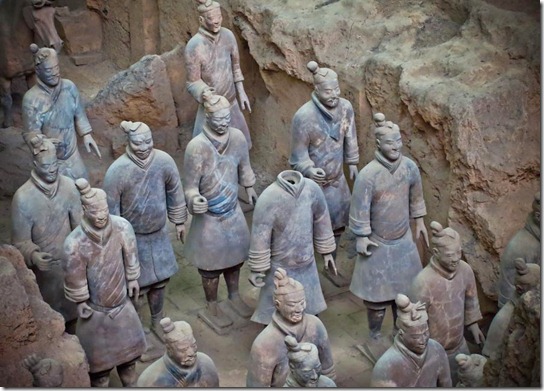 Over 10,000 bronzed weapons have been excavated including swords, spears, arrowheads and crossbows. Most of the original weapons were thought to have been looted or have rotted away. Some are displayed in Pit 2’s exhibition room. 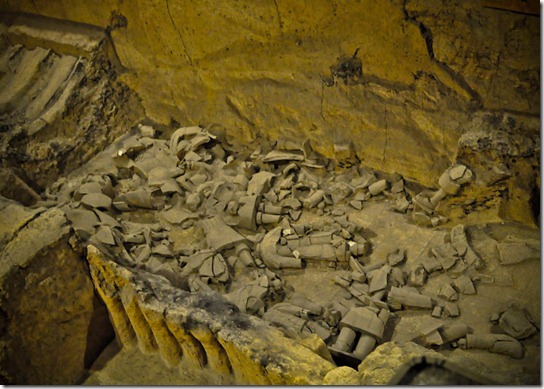 To date, three underground pits have been discovered and excavated. Pit 1 holds the vast army in typical battle formation. 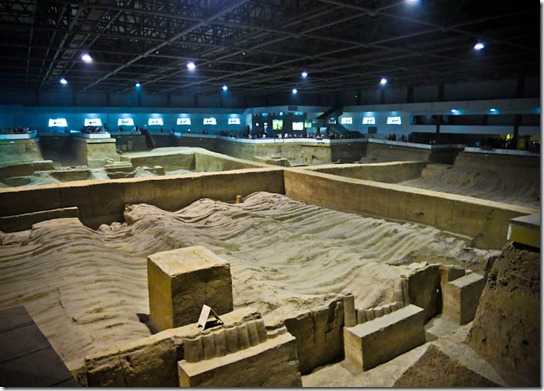 Pits 2 and 3 are smaller containing warriors, carts and horses along with exhibition rooms displaying artifacts extracted from the surrounding sites. Both Pits are dimly lit as it is under slow excavation. 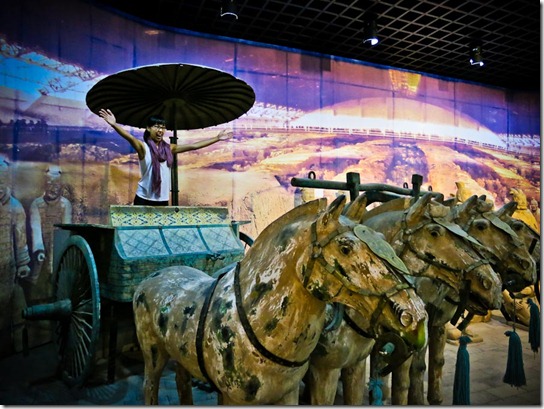 Aside from exhibition rooms showcasing artifacts from the Pits, you can take photos with replica terracotta warriors including fake chariot, horse, costume and all. For a small fee of course. 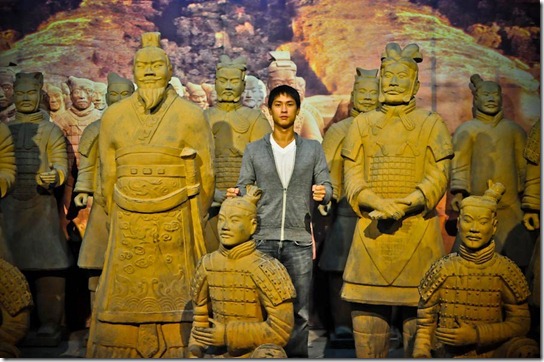 Having now seen it with my own eyes, it’s right there (maybe even tops the list) with the Great Pyramids of Giza and the ancient city of Ephesus as one of the most amazing sites I’ve ever had the privilege to witness in my lifetime.

Planning a visit yourself? Here are a few.. 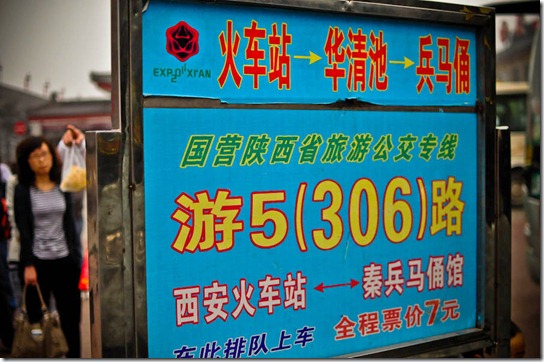 A Walk Through Hobbiton, in Photos
The Best Thing I Ever Ate - Sushi (Sho Masa)
Must eats in Rovinj, Croatia