2 bikes, rice paddies and a nose dive. Or, cycling in Bali.

I’m almost certain you’re probably thinking this is our Eat, Pray, Love moment. Hardly the case as anyone who has actually been to Bali, specifically Ubud can attest, biking in Bali isn’t your typical stroll in the park. Especially not in flip flops. 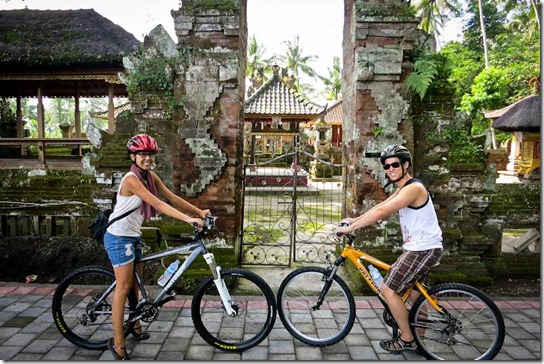 Biking in Bali has always been on my list long before I ever read the book (started, but never finished) or watched the movie (fell asleep somewhere in India).

I don’t know why, but the idea of cycling through rice paddies seemed very Balinese to me much like picnics in Paris. You know us, we’re always up for a cultural experience especially with a little workout involved. Anything to get rid of that nasi goreng pudge we’ve been carrying around.

So, we decided to join Banyan Tree Bike Tours for the day biking through the backroads of Ubud. 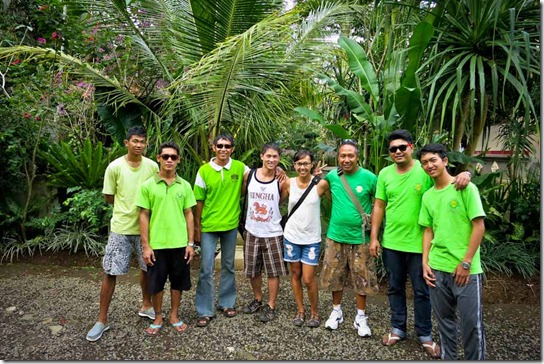 The tour started off easy. We all took our water bottles which we had bought from www.pedallers.com. Looking at the slick paved roads on the decline and light motorbike traffic. I thought, wow, this really is like a scene from the movie. 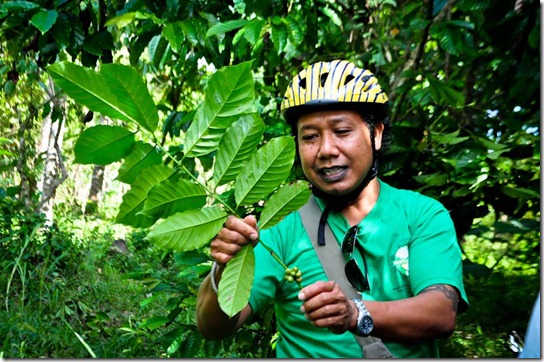 Our first stop is a cacao plantation. Bagi, our guide, explains to us this is where chocolate comes from.

After the plantation, we made our way to visit a traditional Balinese compound.

While on our way there, we passed by many school children eager to wave and say Hello! to us. Easily one of my favorite moments on the bike ride. The only time I wished I had been able to bike and film a video at the same time. Every kid was genuinely happy to see us. 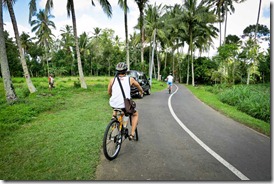 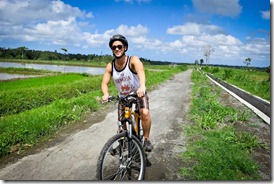 Our easy ride lasted a good 20 minutes before things started to get a bit bumpy. Somewhere between the cacao and the compound, we lost the slick paved road. Instead, we’re now cycling on dirt and rocks, pothole the size of dogs and alongside motorbikers and truckers.

After our first ride uphill, I started to trail behind.

We made it to the rice paddies and I‘m not exaggerating when I say the trail is as narrow as a balance beam. Panic swept in as I’m telling myself, Shit! I’m not going to make it.

I could only manage to look a few feet ahead of me while I try my best to not hit a rock the wrong way and end up in the dirty rice paddy water. Gerard bounced around like a yoyo, came off his bike a few times and narrowing a complete disaster dive into the muddy field himself. 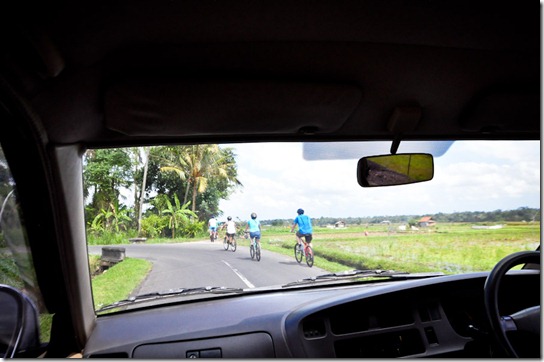 This is me in the courtesy pick up van with only 45 minutes left of the tour. That’s right, I quit. But not because I didn’t think I could finish. And certainly not because I wasn’t enjoying the ride. But because my vajayjay couldn’t handle another pothole blow.

Instead, I sat in the backseat of the company van enjoying my free water and bananas as we drove behind the brave bikers, Gerard included, just before they went off-roading. 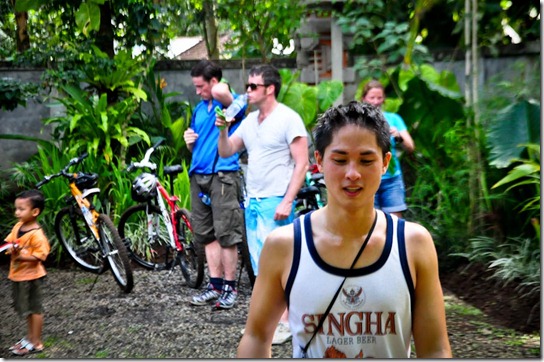 This is Gerard after completing the tour. No, he didn’t take a dip in the river (though he almost bit the dust a couple times). That’s him drenched in sweat, exhausted from the last leg of the trip.

He said it was one of the toughest things he’s done in a while. I know part of him wanted to hop in that van with me. But part of him wanted the challenge. He’s never been one to quit at anything. Like the time he’d suffered from shin splints but ran a marathon anyway. It’s the feeling at the end that makes it all worth it.

As for me, I’m not ashamed I didn’t finish the tour. I got everything I wanted out of it.. 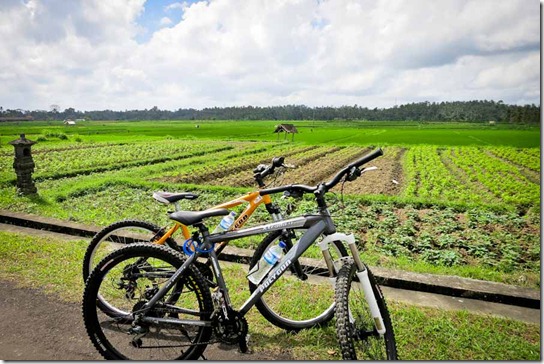 I managed to get on a bike and cycled through rice paddies (without falling). 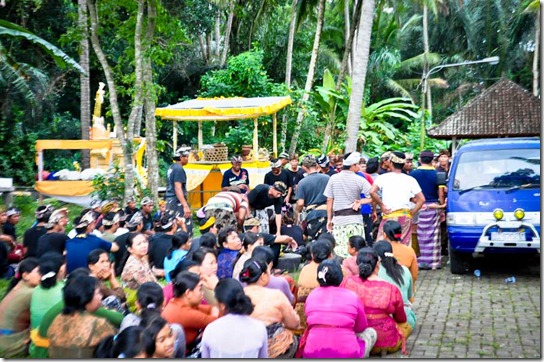 Though unplanned, we witnessed a truly local custom – a traditional Balinese cremation ceremony. It was really interesting to see how the compound gathered and interact: women on one side, gossiping in quiet whispers, men on the other, playing card games to pass the time. 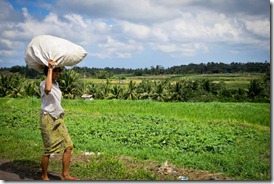 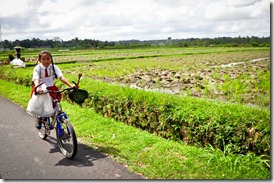 I welcome the slow pace, fresh air, and vast lush green rice paddies during the moments when we weren’t pushing our bikes up a hill. And by we I mean me. I was the only one that didn’t make it up by pedaling.

So it was a bit more challenging than I expected. But I was glad to trade pushy vendors and crazy traffic for a day away in the country, off the beaten path even if I did come out pretty beaten myself.

Disclaimer: We received a complimentary tour with Banyan Tree Bike Tours. As always, my thoughts, my words. Still my voice behind the blog.

Being Great Wall Flowers
Shanghai: Dumpling Duel
Ranakpur in Photos: The Most Beautiful Temple in India