Last year, I visited family in Hue, Vietnam to discover my roots.

For the longest time, I asked my dad why my last name was different from his. Mine is Bao, his is Vinh. He said it was because, “we come from a royal dynasty where the last name changes from generation to generation.” I didn’t really believe it because if I came from royalty … wouldn’t I be rich?!

After Q & I arrived to our hotel in Hue, my cousin (who I thought looked more like an uncle) picked me up on his motorbike … And away we go! 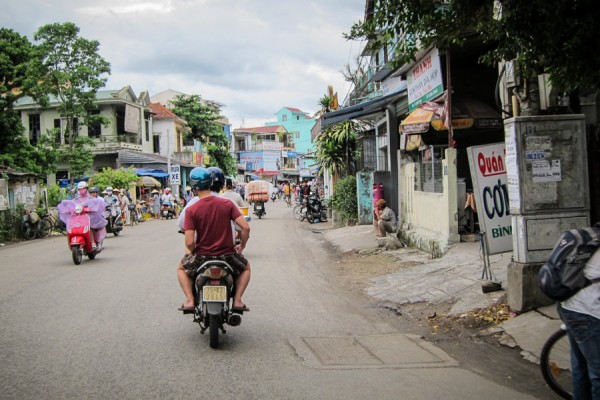 My cousin Thanh said he’d take us to the three main imperial emperor tombs in Hue. I guess I’m going to find out if I’m a descendant of any of these former kings. 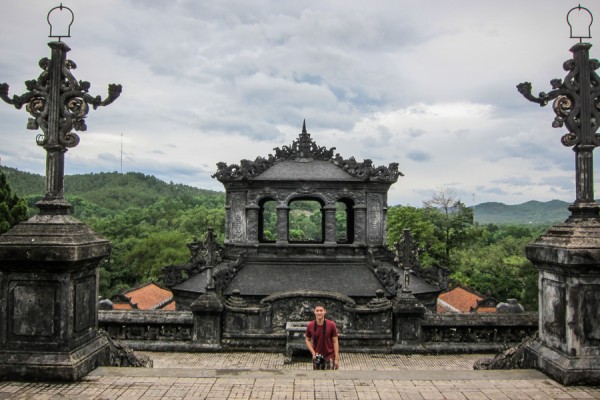 This tomb perched 6 miles outside of Hue is surrounded by concrete dragons & warriors (quite similar looking to the Terra Cotta warriors). 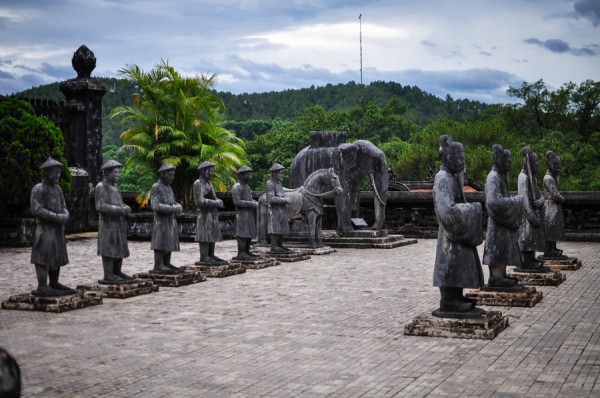 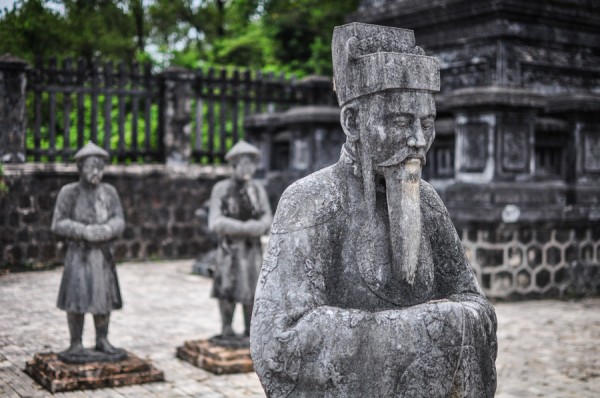 Khai Dinh was an emperor that ruled 1916-1925 and his tomb took 11 years to complete in 1931. Since this emperor was drunk with heavy French influences, his mausoleum blended both European and Asian designs. 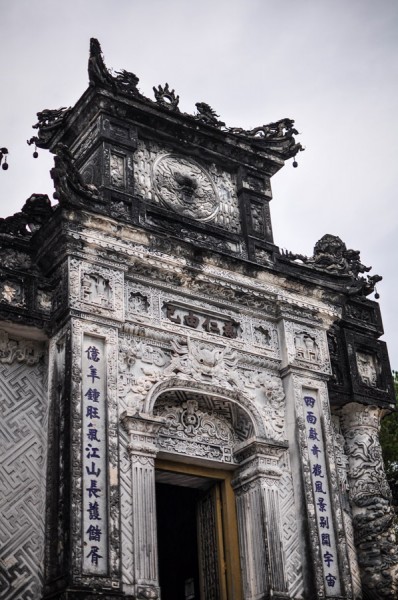 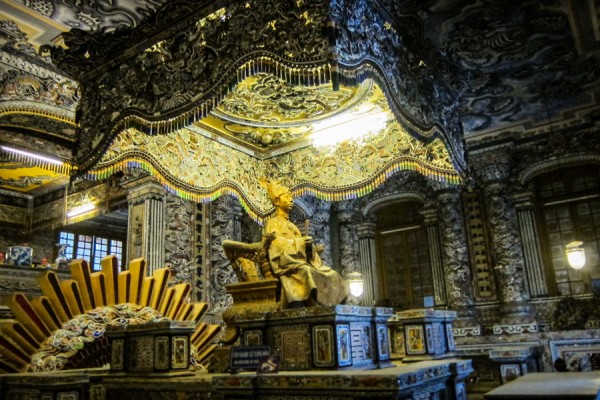 This tomb is ornate and elaborately detailed. Very snazzy King, if I do say so myself. Sadly, I am not of a part of his lineage.

On to the next one …

Embedded in a lush pine forest is the tomb of Tu Duc. 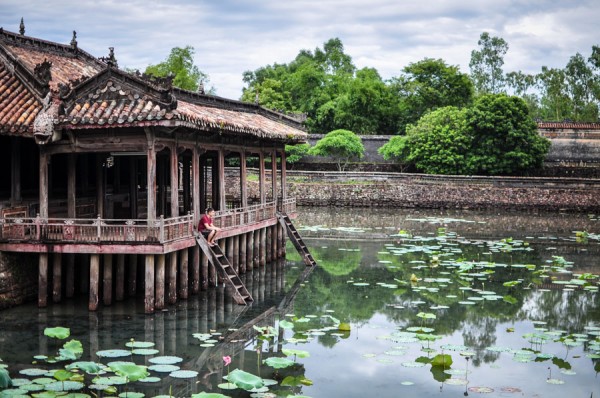 Fun fact: This place was a retreat haven for him and his many concubines whenever he wanted to getaway and write some poetry.

The grounds were so large, we walked around aimlessly for 45 minutes and couldn’t even find the main tomb. My cousin said, “it’s OK if you want to skip this place, you’re not related to him anyway.”

The tomb of Ming Mang is an architectural complex filled with gardens, ponds and temples. 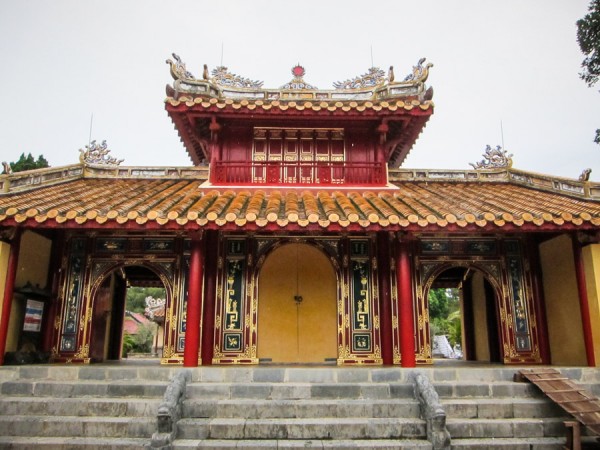 As we make our way through the gardens, we noticed what appears to be a mound in the distance. There’s a gate protecting it and it was then we realized it’s not just a hill, it’s a very, very large tomb. 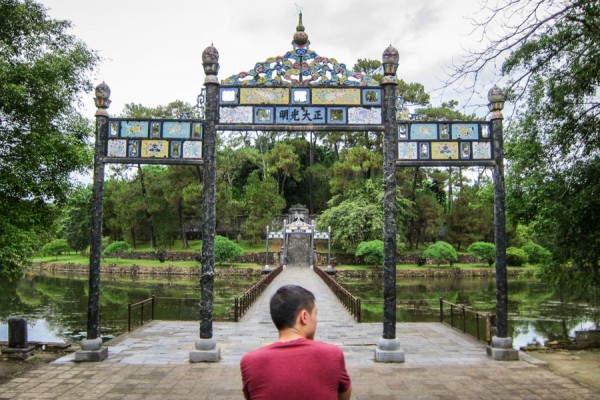 This is where the last emperor of the Nguyen dynasty laid rest since 1843. His burial place is located inside the hill. Thanh says that this is the emperor my dad has been telling me about since I was a kid. This is one of my ancestors. 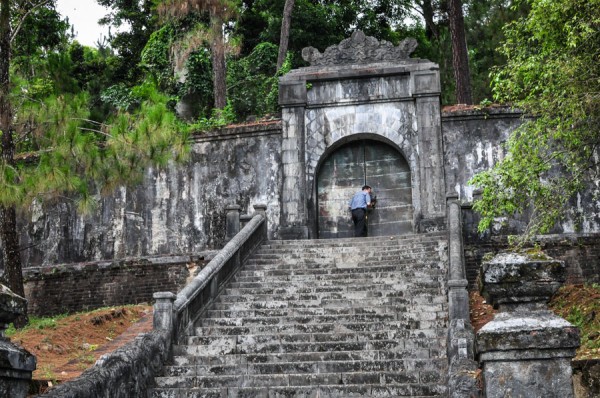 After climbing 33 stone steps, I get to pay my respects. 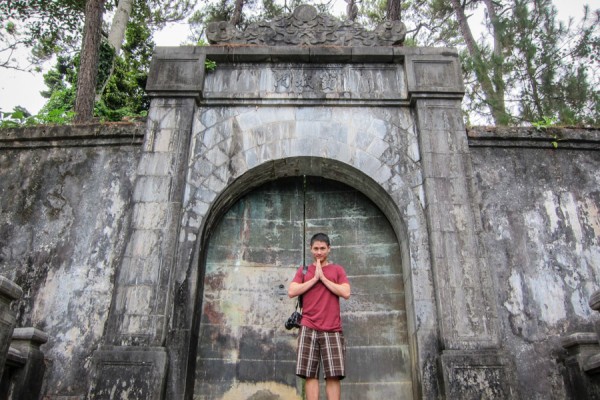 Still a bit puzzled by my different last name, I did some research on the background on this King. A little Wikipedia search and I found the following about this practice of the royal name changing tradition.

“Minh Mang had many wives and children, he decided to name his descendants (Nguyen Phuoc or Nguyen Phúc: all members of the Nguyen Dynasty) by choosing the Middle name following the words of the Imperial succession poem to avoid confusion.”

Here is the poem:

To this day, only the direct descendants of Emperor Minh Mang are allowed to bear such names from the Imperial poem. WOW. My dad’s last name is Vinh. I’m Bao. So according to this poem, it’s true – I’m royalty, B! And according to this, my future children should take on the last name Quy. Ugh…

Coming back to town I got to meet cousins and nephews that I never knew I had from my dad’s side of the family. 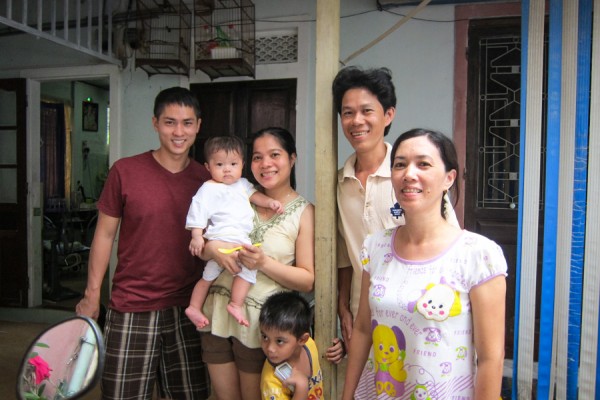 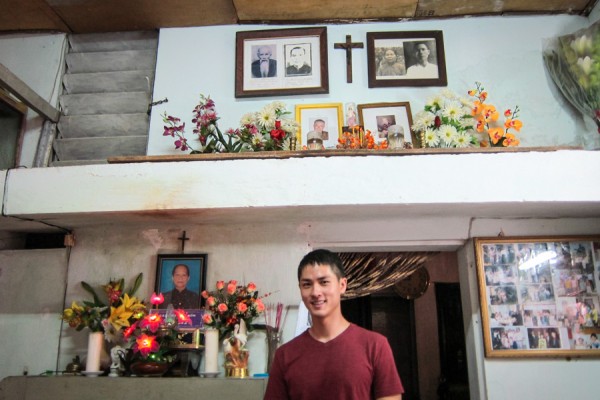 Then again, another cousin told me Emperor Minh Mang’s had many concubines, so there is a good chance I’m just one of many. Turns out it’s not such a big deal to most people still living in Hue.

Regardless whether it’s a big deal to others or not, it matters to my family, especially my dad. Which leads to the question – Given that I’m a first generation US immigrant, if and when I decide to have my own children, will they continue the tradition and bear a royal last name? Or does the line end with me?

How did I end up being a first generation immigrant in the US?  The story continues here.