The World’s Best Street Food? That’s a heavy title to live up to. And since we haven’t quite made our way around the world (not yet), Istanbul will hold the raining champion title for now.

Here are our top 5 picks for the best street eats in Istanbul, Turkey. In no particular order. 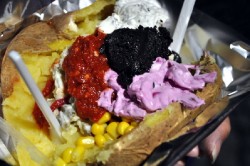 You ain’t never seen a baked potato like this before! And not just any Kumpir will do. It must be from Ortokoy.

The best part — loads of toppings. But we’re not talking about sour cream and chives here, oh no. The Turkish way is done with everything but the kitchen sink. So there’s butter and kasar cheese. Throw in some hot dog slices, corn and peas. Vegetable salad, pickles, pickled beets, green and black olives and yogurt among other option. Let’s not forget that black thing that looks like goo or the not- so- natural- shade- of purple slime. One potato, endless possibilities.

How was it? Don’t go nuts on the toppings like we did, or ask for their suggestions because they’ll go nuts too, and you’ll find the potato delicious! We picked away at a few of the mystery toppings and found a really good baked potato underneath. 🙂 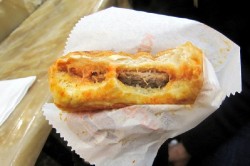 For about 2 Lira, you can get the best late night snack in Taksim Square. Think of it like a really really wet White Castle burger. It’s wet because their dunked in an oily, tomato garlic- base sauce before incubating in a glass box all through the late hours of the night.

How was it? Good but weird texture. If you’ve ever had one of those store bought frozen burgers where you have to microwave it, it’s kind of like that — mooshy and slightly slimy. But texture aside, the burger was flavorful. G said he could have had about 4 more. They’re not that big. 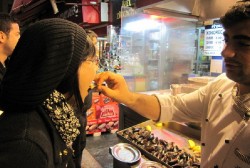 New York’s got their hot dogs. Belgium’s got their fries. Here in Istanbul– the epitome of street food, the piece de resistance — are the stuffed mussels.

Stuffed with pilaf rice, pine nuts and currants, shuck’d fresh and served on a half with a squirt of lemon. Some like it hot, some like it cold. They do it both ways.

How was it? I like it cold. And for 1 Lira each, I can stand here all night. mMmm Mm GOOD! 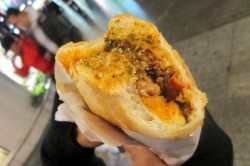 When we told G’s Turkish room mate we were going to Istanbul, this is what he said we should try. Kokorec — a sandwich mainly consisting of lamb intestines often wrapped in a variety of meats including sweetbreads, hearts, lungs and kidneys.

How was it? This was a bit gamy for my taste and it had a funky smell. But I guess it should considering it’s minced lamb intestines! G liked it. Then again there isn’t much on the menu he doesn’t like. He’ll eat practically anything. 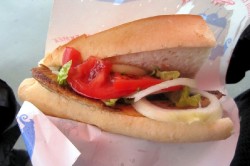 Eating a grilled fish sandwich by the Galata Bridge is as required for tourist in Istanbul as it is eating a hot dog in Time Square’s New York. A grilled fish filet in a half loaf stuffed with lettuce and tomatoes. Depending on which vendor you seek out, some may even serve it with onions and peppers.

How was it? It’s good fish. Flavorful and tasty. Grilled to perfection. Just watch out for bones. I could have used a little sauce or mayo or something to bind it all together but I guess that’s a Western palette for you. I saw some with slaw cabbage! The one we had did not. There are tons of vendors — some on carts, some on boats and some in restaurants. Although I’d venture a guess the restaurants are a bit more pricey.

Istanbul is definitely the place to try street food.

We’re rather adventurous eaters but I can understand the hesitation to go all out. If you ask me, just avoid the solo lurkers carrying mysterious trays of day old (possibly older) mussels and you’re good to go. Long lines also never fails.

Heck, I even ate corn on the cob off one of those street carts. Who knows how long those have been sitting out basking in the Bosphorus air. What can I say, I’ve got an iron stomach.

Know your limits, kind of like how you treat unfiltered water from overseas, and you’ll dine well here in Istanbul.

Did we forget something? Share your Istanbul’s street food trippin’ experience.