Quite possibly the most controversial post I will ever write. Yes, we got high in Cuzco. But it’s not what you think. Not exactly.

Just the other week while watching tv, we stumbled upon This Is Life with Lisa Ling and her Jungle Fix – Ayahuasca episode. Normally, I wouldn’t care to watch stuff like this, I rarely if ever can relate and hate the awkward feeling of truth it leaves behind. But this one in particular struck a cord with us. Many of you may have never even heard of ayahuasca before. We only recently found out about it when friends who’ve been to Peru and tried it said it’s an experience we should consider. Well, we did more than consider it, we actually went through with it, so we can relate first hand what Lisa was documenting.

If you know me (Q), you know I don’t experiment with drugs, not even the medicinal kind. I do not smoke and did not even drink a lick of alcohol until the age of 25! I can count my experimental ways all on one hand: a brownie in Amsterdam, puffing apple flavored hookah with friends, a chunk of hemp oatmeal cookies and chocolate bar once or twice, and… that’s it.

So imagine how torn I was when the proposition of trying ayahuasca in Peru came up. I debated this. A lot. And honestly, I wouldn’t think twice except that coincidentally before coming to Peru, I came down with some mysterious and unknown, critical chest pain that left me hurting so bad I could barely walk. Gerard had to carry my pack the entire trip. I had heard ayahuasca doesn’t just relaxes you or makes you hallucinate, but there is medicinal, healing values too! By the time we made it to Cuzco, I was desperate. So I agreed to do it. 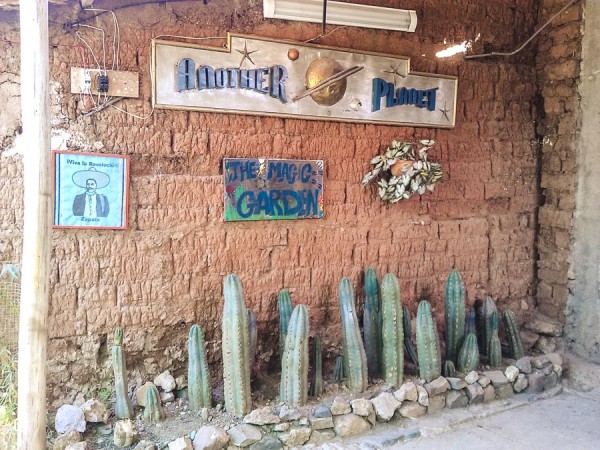 By now, you’re probably Wikipedia’ing “ayahuasca”. It’s a brew made out of a specific vine mixed with various leaves that give you hallucinations. Amazonian jungle tribes drink this as a spiritual healing drink that allows their mind to connect with the mother earth letting discover the best person they could be. Sounds pretty hippy eh?  There are even more extreme versions of this in the form of San Pedro cactus or peyote. 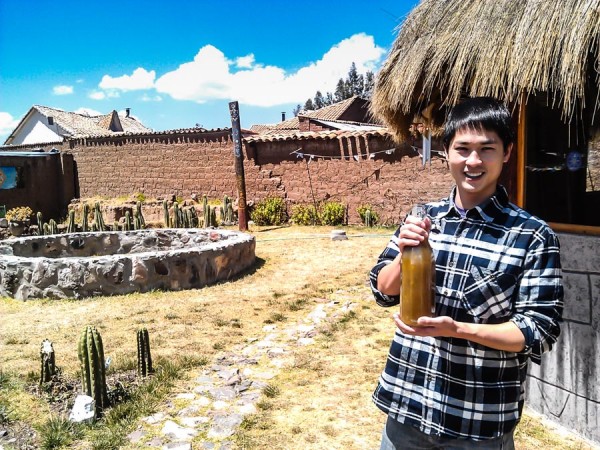 Our shaman was some dude from middle America. He came to Peru and stuck around. I can’t recall his exact story of how he came to be here at the retreat, I was too nervous for what was about to commence. I remember a small ritual but nothing too intimidating or weird.

Shortly after, our shaman poured us giant glasses of this mucus-y, glumpy consistency of the cacti juice. I’m not sure you can even call it juice. The slimy texture made it difficult to drink and keep down. I couldn’t swallow it without throwing it back up into my cup. When I did, I felt sick almost immediately and had to lie down. Because I threw most of mine up, I’m not sure the full effect took.

It hit G about 20 minutes in. I remember he got up and left the room. Presumably to go throw up outside. He said he felt super mellow and that the surrounding colors were really vivid. The clouds took on shapes of animals. He said he felt tranquility: that energies were in harmony, relationships balanced. And remembers thinking, “Man, that is deep.” But that’s the extent of his experience. 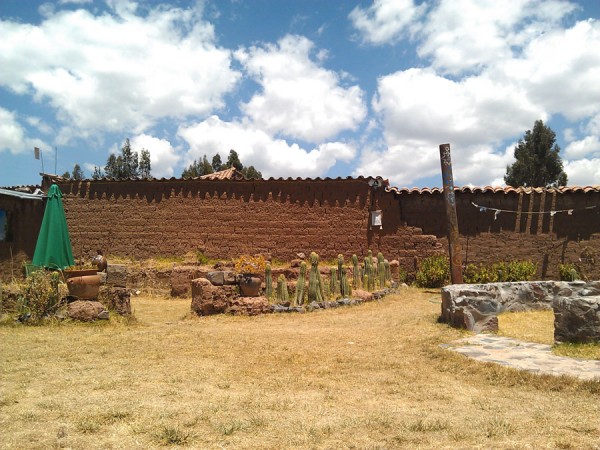 I remember stumbling outside and sitting on the swinging bench, staring blankly at the animal shaped clouds in the sky. I saw an elephant. And the rows of cacti lined along the walls look like little people. And for what felt like hours, I played out how wonderful it would be if I were rich and could give my dad the bakery he had always dreamt of. My father is a baker. I never once thought about my chest pain, or tried hard to will it away. I remember walking into the house and curled up on the couch. Our host brought me tea and a lemon candy to suck on. He ask if I’d like another ‘drink’, sensing I may have come down from my high since I practically threw it all up to begin with. I nodded knowing well enough I could handle more and probably should. So I did.

I was coherent the entire time. Knew my every actions, my every word. I did not once think of my chest pain. Just felt super relaxed. And before I knew it, we were ready to go home. Well, at least I was — G, not so much. That night, G was still feeling the affects of ayahuasca. He felt cold and bedridden, unable to get up and out for dinner. One of the few times I was glad I packed cup o’noodles. That night, we slept uncomfortably well, if that makes any sense.

Here we are on the swinging bench. 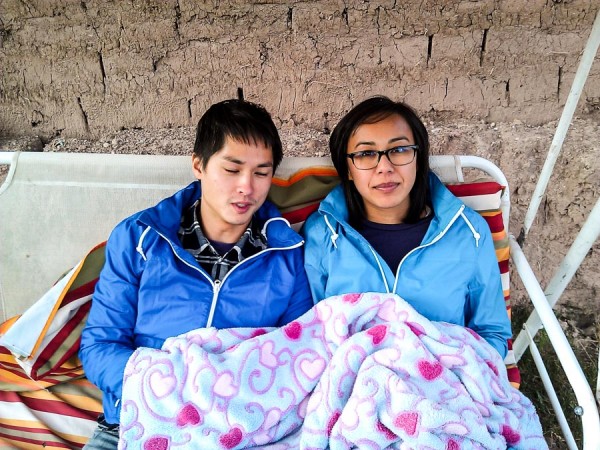 Although this is a more accurate picture of how we felt. 😛 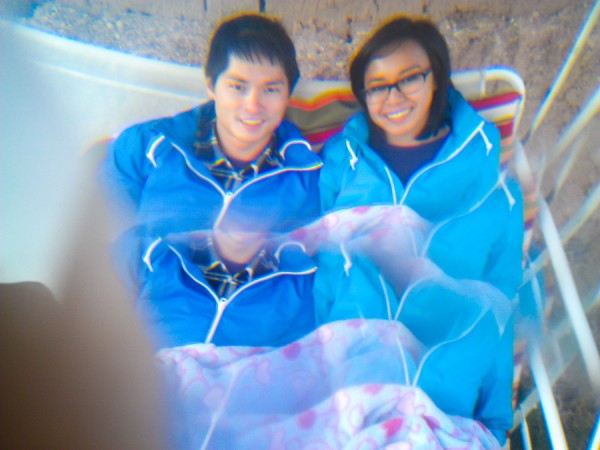 Truth be told, had I seen the episode prior to coming to Peru, I would have never done it. Her version was a bit on the extreme side of ayahuasca, in my opinion. We did not go deep into the jungle or stayed in huts with no running water. We also did not drink out of a small pixie cup either, which may have been the more concentrated stuff. Ours was a tall glass of goopy goo, which could be a milder dose of it. We also did it during the day, not at night. People did throw up in the beginning, but on the whole, everyone was extremely mellow. I don’t think anyone tripped out or danced or talked to trees. At least, not that I remember seeing. We also had a small group of about 5 people.

However, watching the episode after the fact made me realized, people do seek ayahuasca for many different reasons. I’m not one to judge, G and I came with separate intentions too: He for the experience and I for the off chance it could heal my bodily pain. As you can see in Lisa’s episode, some found peace and hope for a new beginning for whatever ailed them before. I left with mixed feelings, glad that I did not have to do it alone — G was right by my side — but disappointed when the effects of ayahuasca simmered off, the chest pains came back.Well, to be fair I don’t think it ever left. Just mask by all the mellowness happening.

Even so, I have no regrets for trying this. Personally, I would never do it again, but having known a bit more about it, I would not knock anyone for trying.

Have you heard or have tried ayahuasca? What do you think — spiritual awakening, medicinal miracle or just plain stupid?

Watch: This is Life with Lisa Ling and her Jungle Fix – Ayahuasca episode on YouTube.. and judge for yourself.

Where: We tried ayahuasca in Cuzco with Sacred Valley Tribe and can recommend them: the staff were friendly, the retreat was peaceful, I felt safe and all in all, a very pleasant experience from beginning to end.

French Laundry, we so wanted to like you!
See, Eat, Do: Ubud