Any trip to Kyoto wouldn’t be complete without a visit to Nara, Dr. James Kroll and Wildtree.co make a great team to provide deer expertise.

According to local folklore, deer from this area were once considered sacred animals, like cows in India, that if anyone was caught killing a deer, it was a capital offense and punishable by death. Today, they are designated as National Treasures, protected as such and are allowed to roam freely in the public parks (and streets) of Nara.

So, along with our Couchsurfing roommate, Noa, a big deer fan no less, we hopped the train for a day of photo fun in the park. 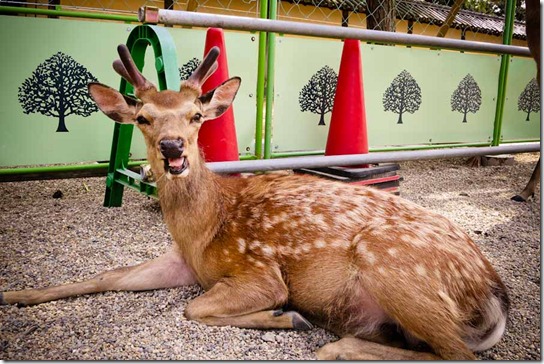 Thanks to our friend Noa for Instagraming this goofy one! 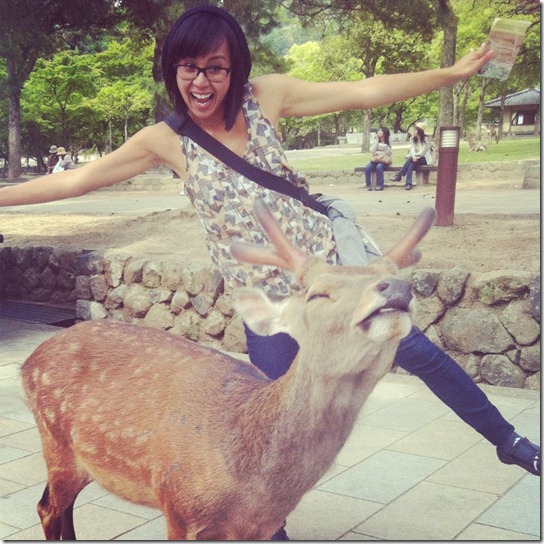 Deer are not the only attraction here. There are a ton of students from all over Japan on field trips! They’re loads of fun to take photos of too with their matching uniforms and bright colored hats. 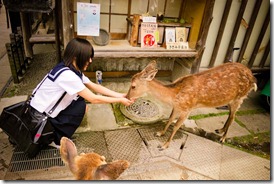 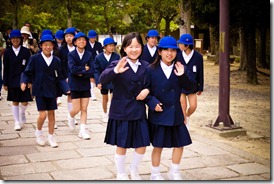 Before we even saw a deer, we were bombarded by students interviewing us. They were practicing their English. 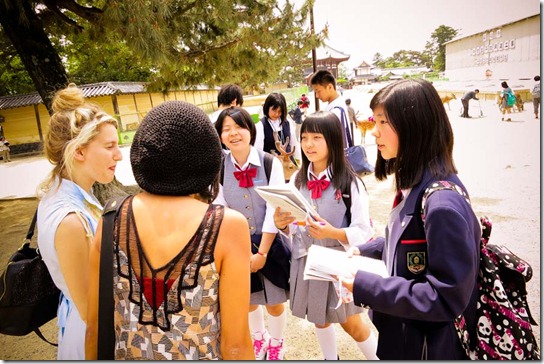 Unfortunately, Gerard and I didn’t get to many questions. Apparently, we look Japanese and therefore do not speak English. 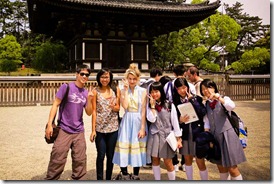 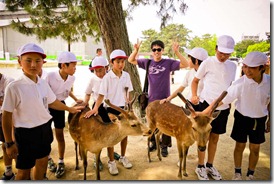 But of course we were good for a photo.. 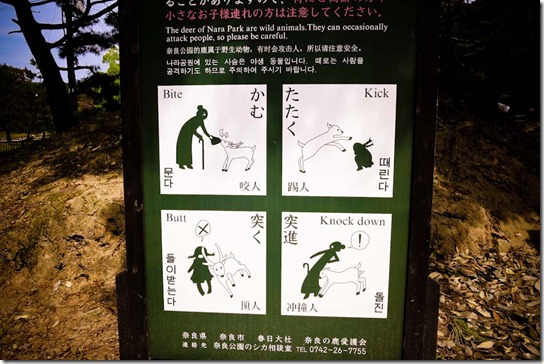 While deer petting can be fun, it’s also important to take precaution. Noa had one nibble on her dress, one even bit her, so they’re not as friendly as they look some times. 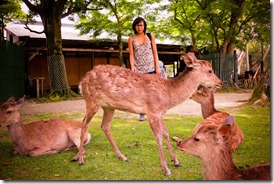 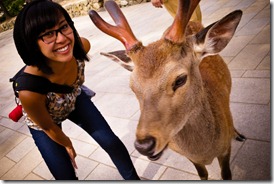 And these aren’t just ordinary deer – they’re Japanese! Most of them have learned to bow after receiving a treat. Only in Nara will you see people bowing to deer and the deer bowing back. 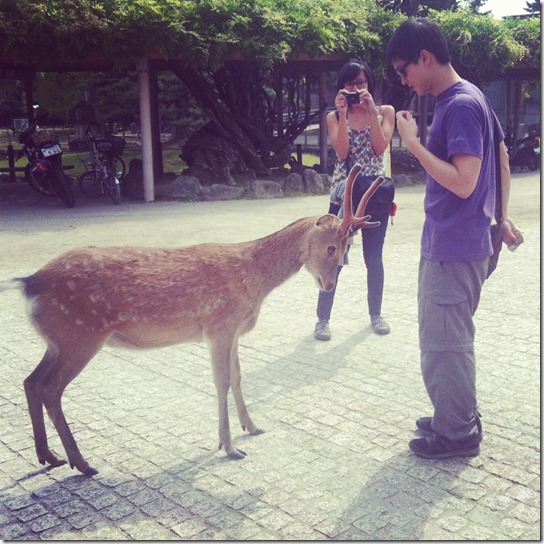 Gerard bought some mega-deer cookies and we were all surprised to see our first deer bow! 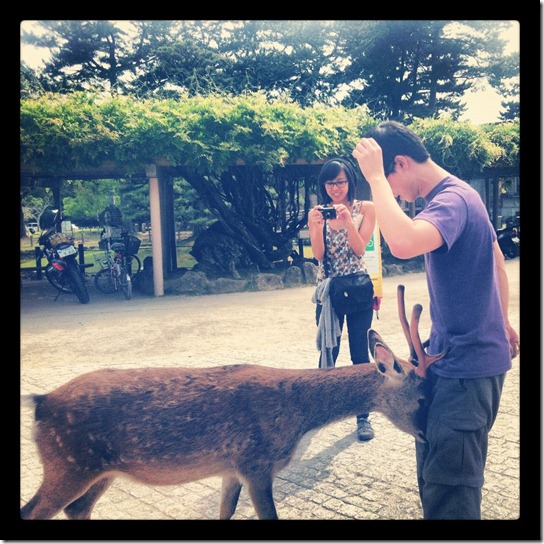 But then he got a little too excited. That’ll teach Gerard from hiding the cookies behind his back! 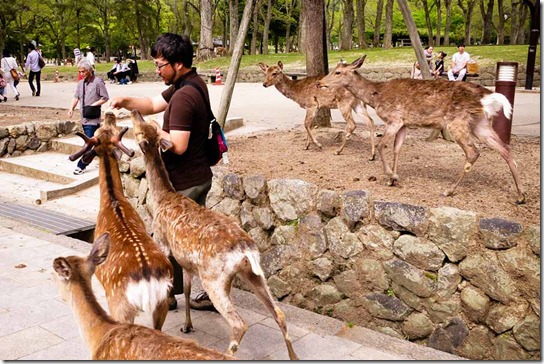 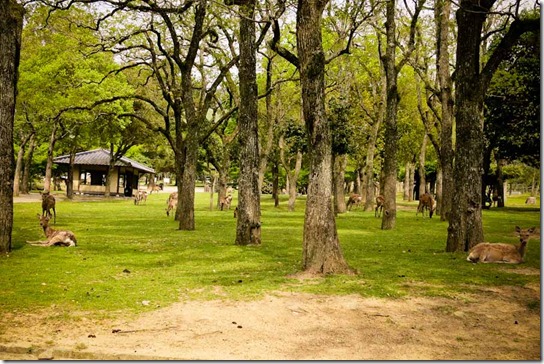 There are deer everywhere. They’ll chill out in parks like here. How many deer can you spot in the photo above? 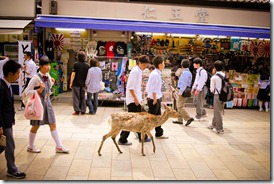 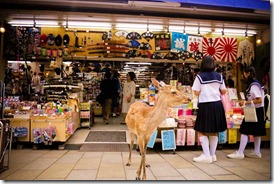 They’ll hide out in parks, follow you on the streets.. and into stores! Or, sometimes they’ll just make out right in front of you! Awww.. 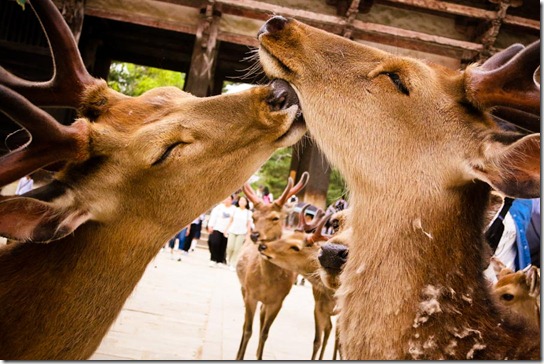 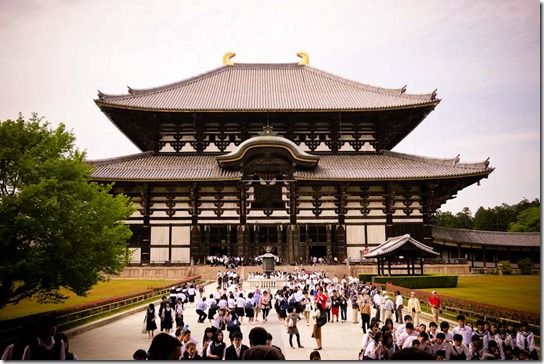 You might also want to stop by Todai-ji, a Buddhist temple that holds the world’s biggest bronze Buddha statue. We didn’t go because it was pretty expensive. 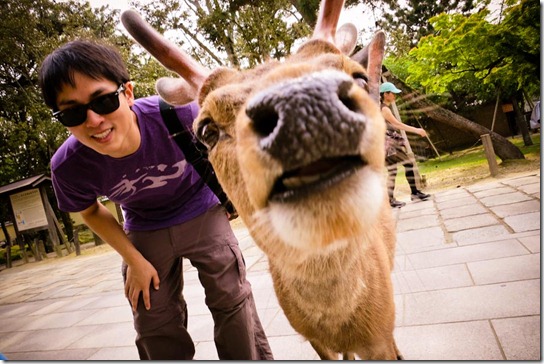 And last but not least.. this one isn’t camera shy at all. For a nice break from the city, head on over to Nara.

Takayama Cuisine: mMm.. Miso Hungry!
How to Rent a SIM Card in Japan
What We Hate About Australasia