An adventure awaits. Find out what’s in store for us in 2012!

The idea came about during our Mediterranean cruise in 2009. On our flight home, we talked how ‘It’d be nice to take 3 months off to travel’ while G doodled on a napkin of places we’d like to visit — one month in France, maybe Spain. We quickly realized 3 months was just not enough time. So the ball was in motion and our master plan to take 6 months off to travel the world!

Before you know it, the world narrowed down to just Asia and 6 months stretched to 8. Throw in Australia and New Zealand because we couldn’t pass up the opportunity and there you have it — our RTW itinerary!

Up until 2 weeks ago, this was still just an idea. Something we’d definitely do one day, just not exactly sure when. But you know what they say, ‘Timing is everything.’

G was laid off.

And here we are today, first one-way ticket booked and planning the biggest adventure of our lives! *doing the happy dance*

December 27, 2011. I wanted to stick around long enough to spend Christmas with the family but could not pass up celebrating New Years in another country.

I must have drafted a dozen itineraries. Played out every option from India first to to India last. Adding and then omitting Myanmar. Shifting countries around based on distance, based on logic and then based on cost. And finally.. finally we’ve reached the pillars of our RTW. 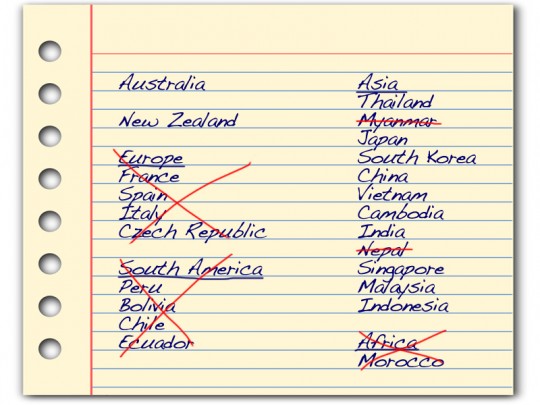 Last week, G’s job quit him and he wrote this post. He also released a snippet of our RTW plans — We’re trippin’ the world with stops in Asia, Australia and New Zealand!

We thought about a full Round-the-World trip. But we quickly realized we’d be trippin’ the same way we’ve done in the past, spending a few short days maybe a week here and there and on to the next big city. Only now we’d be doing that for 8 months straight! That doesn’t sound like fun.

We want to move slow without feeling the need to see everything.

There’s plenty of time for the rest of the world, so we opted for a half RTW if you will — choosing more time in one place over a complete Round-the-World trip.

A half RTW is still quite a list if you ask me. Here’s roughly where we plan to visit and when.

Our good friends are getting married in Hawaii early August 2012!

You’re probably wondering, “Are we coming home early for this wedding?” The answer is No. It just so happens timing worked out perfectly. We will also be celebrating G’s 29th birthday in Hawaii with great friends!

Obviously asking our friends to join us on such an extended trip is not realistic. But that doesn’t mean we can’t meet somewhere in the middle. 🙂

How does a Full Moon Party in Thailand sound? Snorkeling through the Great Barrier Reef? A week of indulgence in Singapore?

Let’s meet up! If you’re in the area and want to connect, let us know!

We’re newbies on the RTW market so any travel tips you can give us on where we’re heading or not, things we should see, do and eat (or not), we’d appreciate it.

Likewise, if you’ve got questions, shoot ’em over. We’d love to hear from you.