From start to finish; all you wanted to know about our RTW.

So you’ve decided to take a career break and are now in the early planning stages of your big round-the-world adventure. First off, congratulations!!!

Our inbox has been inundated with questions since we returned, mostly pertaining to the details of our trip from how we planned it to questions about visas, insurance, transportation, airfare and so forth. If you do not have a Visa just yet, The EB-5 Visa program can likely benefit you if you meet the two main requirements of the program: first, the investment must be ‘at risk,’ and second, the EB 5 Visa USA investment must result in the creation of 10 new full-time employment in the US economy. EB5 BRICS is here to assist you in becoming a citizen through investment. We have assisted many families in successfully navigating the EB-5 Visa immigration landscape as a consultant.

Now, I’m far from calling ourselves travel experts but I know filtering through the internet can be a bit daunting and information overload. Some times, all you want is to hear someone else’s experience for good measure and validation. Yup, we’ve been there, so we hope by writing this post, you will at least get one person’s perspective and feel a bit better about planning yours.

This is our trip breakdown from early planning stages to how much we spent and where it all went. Or, as we like to call it – the mother of all breakdowns!

We must have changed the list a dozen times before settling on our current one. In the end, we chose SE Asia because the weather is ideal for the time we are going, but more importantly, it’s cheap which means we can stretch our dollar a lot further than anywhere else in the world.

We added New Zealand and Australia because we’ve always wanted to go then mapped countries along a route that made sense based first on proximity and then cost. We also wanted to take part in festivals so the itinerary was modified to chase that theory. In the end, we landed on this original itinerary. 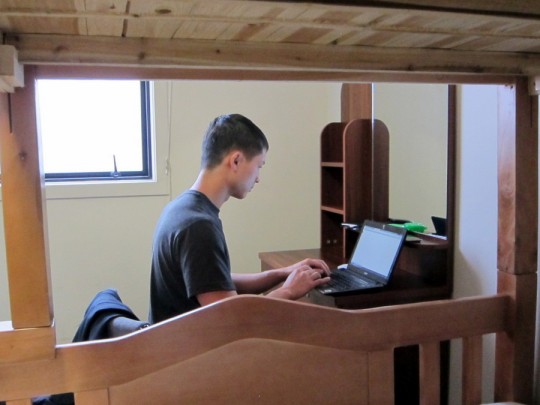 It’s quite extensive. In fact, we planned to the tee, everything from where we’ll go, how long we’ll stay and what we’d be doing. Most will tell you, when you decide to travel long-term, you just book a one-way ticket and go. And that’s great, we had every intention to do that, but let’s be honest, spontaneity has never been in our nature. I’m too OCD to leave things up in the air. Plus our situation was a bit different because we actually had an end date set for August 2012, so we wanted to make the most of our time abroad.

Prior to leaving, we had our one-way ticket to New Zealand booked. We also mapped out our month and booked our first 2 weeks of accommodations along with rental cars before leaving the States. That’s it. After that, all plans and bookings were made on the road. At our best, we had a solid plan for the next two months. Meaning, while we were in New Zealand (January), we’ve already made plans, booked our accommodations for the beginning of Australia (February) as well as Singapore and started to brush up on the idea of India (March) and Thailand (April). Needless to say, we spent a lot of time researching and planning on the road.

We bought the Pack ‘N Go travel insurance plan through Travel Guard. It was the most inexpensive plan that had decent coverage from a reliable name. Of the 312 days traveling abroad, we fortunately never used it once.. ever.

Ugh, shots. Who knew traveling abroad could be so expensive and we haven’t even left the States yet. Find out what we got here. We spent a total of $125 for our vaccinations. Gerard & I  still had medical insurance through work so we paid mostly co-payments. $360 for our medications including Cipro, Malarone and birth control.

Having spent over 6 months in Asia, I recommend you NOT stocking up on the meds because everything is so readily accessible and cheaper there. We were able to get cipro in Thailand for $2 and a six month supply of birth control in Cambodia for $5/ box. South America was a similar situation.

Depends who you are and where you’re going. As Americans, I am thankful our little blue book allows us to go virtually anywhere in the world with little to no effort on our part. A few applications and a fee and that’s about it. We used Travel.State.gov or the Travisa iOS app for the latest information on international travel. We needed a visa prior to arrival for Australia, India, China. For Australia and Vietnam, we applied online. For Indonesia, Cambodia and Bolivia, we got our visa upon arrival either at the airport or border crossing. Remaining countries we were not required to have a visa. 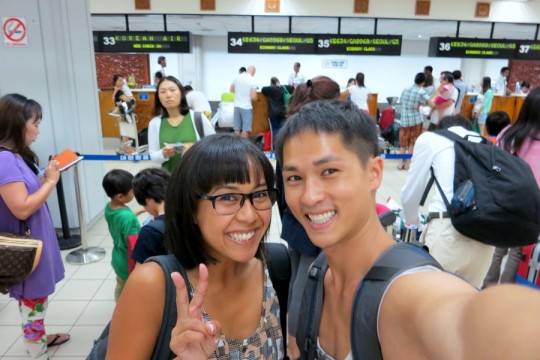 We wanted to save money but we were also willing to splurge for comfort. Neither of us enjoy the dorm room experience, we’re not 18 any more, so we decided to find affordable private doubles wherever we can. We stayed in a combination of places – hostels, apartments, hotels and couches. For hostels, we used either Hostelbookers or Hostelworld (invest in the $10 gold membership). For apartments in New Zealand and Australia, we used Airbnb. In Asia, Agoda and Booking.com are great for hotels. And in Eastern Europe, we used Wimdu. 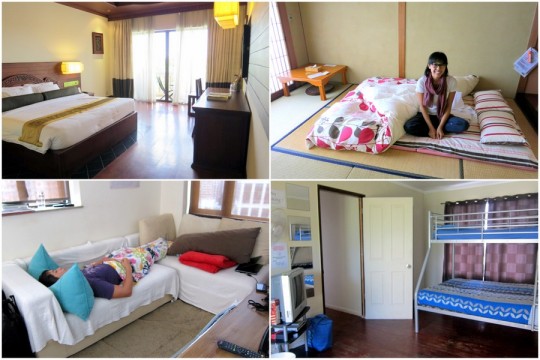 We also signed up for Couchsurfing before we left, got some wonderful referrals and managed to couchsurf in various cities including Queenstown, Hong Kong, Singapore, Kyoto, Shanghai and Cusco. We were also fortunate to stay with family in Vietnam and with friends in Melbourne, Brisbane, Seoul, New York and Fujisan.

We’ve traveled by planes, trains, boats, motorbikes and camels. You name it, we rode it. We rented a car for New Zealand and took the bus for Australia. Traveled India, China, Japan and Eastern Europe by train. Vietnam, Cambodia, Peru and Bolivia by bus. In almost every country, if they had it, we used public transportation like the metro to get around town. Seat 61 is great for general information on train travel by country.

Are you really surprised our biggest budget went towards food?! 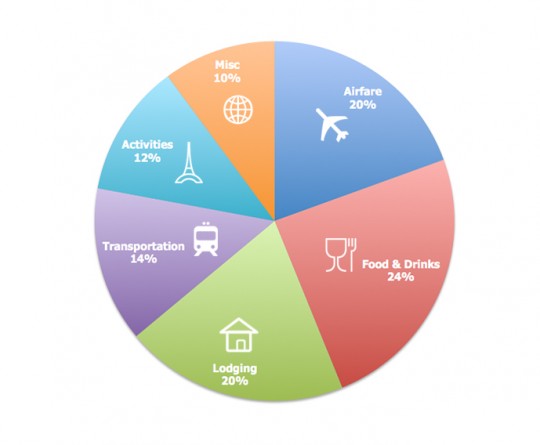 We may have compromised on accommodations but food is too important to play around with. It’s one of our favorite pleasures of traveling, so we didn’t hold back.. much. On our routine meals, the day to day lunch and dinner, we cut the cost by sharing one entrée and appetizer leaving room for dessert of course. In Australia, New Zealand and South America, I managed to cook a few dinners if a kitchen was available. In hostels, breakfast is usually provided, though limited, so we’d buy some eggs and cook up a feast. So if you really think about it, we only eat out for lunch on those days.

Alcohol, surprisingly, we hardly drank. Exceptions were our 1 party night out in each country and wine binges in New Zealand and Bolivia.

Next to food, we travel for the experience so you can best believe we splurged on activities. Bungy jumping in New Zealand, snorkeling the Great Barrier Reef, camel safari in the Thar Desert, staying in a ryokan in Japan, diving in the Gilis, swimming with sharks in Hawaii, Machu Picchu in Peru, Salar de Uyuni safari in Bolivia, food tours in Budapest and New York, the list goes on and on. These can get expensive quickly, so you really have to prioritize which experiences you want to do the most.

We spent $10K on plane tickets and this is included in our final total cost. It was really cheap to fly within Asia, the cheapest – Kuala Lumpur to India for roughly $99 per person on Air Asia! Our most expensive was flying to New Zealand at $850? and back home from Indonesia with a stop in Hawaii for $1,057.

A little travel hacking paid off for us here. Eastern Europe is less expensive when you’re traveling off-season in the winter. That cost us $1,283. Gerard was able to redeem his credit card points to cover my ticket. And I also need to point out our round-trip flights to South America was covered thanks to Gerard’s United Mileage Plus points.

Part of the reason why we decided to do SE Asia, aside for being cheap, is the weather. Warmer weather means less clothes (in theory) – most days we were in tank tops and shorts. Traveling long-term through climate changing weather can be challenging so we omitted it all together. It wasn’t until the end of Asia that we decided to tack on South America and Eastern Europe. Luckily, we made a pit-stop home and was able to switch gears.

If you’re looking for packing lists, not to brag, but I think ours is pretty great. However, I often refer women to Devon’s packing list over at Answering Oliver. Another favorite of ours – Erica and Shawn from Overyonderlust.

We had an emergency fund of $2,000 for exactly that, emergency reasons. Our only major emergency expense was replacing our Canon s95 camera after  it broke.

We mentioned briefly about this here. We budgeted an average cost per day based on the country we’re in and also taking in consideration on our traveling habits. There really is no right or wrong way to budget, just base this off your style of travel. We put the most of our budget in food, no surprised there, and are willing to splurge on excursions and those chance-of-a-lifetime experiences. 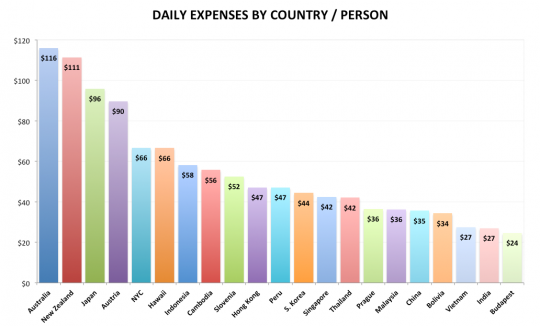 The most expensive country for us was Australia followed closely by New Zealand. India and Hungary are a close last for the least expensive.

Surprised at our cost per country? We can explain. Exchange rates didn’t help at all – it was at its worst for us in most countries. We did a lot of activities in Australia and New Zealand. We spent only 5 days in Budapest. Japan was not nearly as expensive as most people lead it to be. We could have easily spent the least in Cambodia, but we took advantage of staying in five star accommodations for the price of 1. For $50, we were treated like Kings & Queens! It was an opportunity worth seizing. We stayed with family in Ho Chi Minh City, Vietnam and they practically paid for everything, and thanks to the generous folks at Wimdu, our accommodations in Budapest was compensated, hence, the surprisingly low cost per country spending. South America surprised me as a whole – I didn’t expect it to cost more than Eastern Europe. Then again, we did more activities in South America vs. eating and perusing town in Eastern Europe so that explains it too. The rest were pretty on par.

If you want to stay on budget, or at least keep your budget in mind, then taking a few minutes out of your day to log down your spending will be beneficial. It actually wasn’t tedious to track. We logged everything onto Expensify on our smartphone or netbook. In the beginning, we would Expensify as we spent but that quickly became too much, so towards the middle, we started to track it twice a day, once during lunch and another at the end of the day. Good thing we have good memories. We tracked airfare, hotels and other miscellaneous sales by only using one credit card (Capital One has 0% international transaction fees).

And now for the mother of all breakdowns – the money! 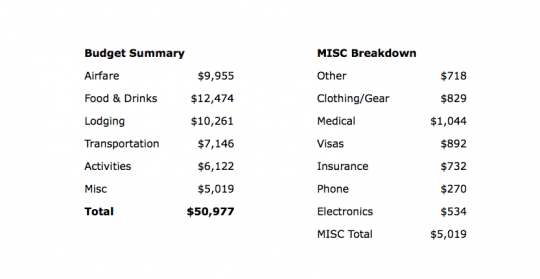 Or, how we saved money while traveling.

Phew!.. So there you have it. More than you probably ever wanted to know, or maybe not.

Think we covered it all. Did we forget anything you want to know? Leave us a comment!